Citizen of the Year: John Wilson 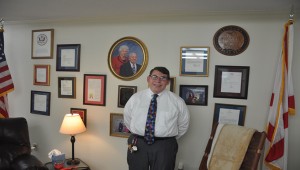 John Wilson, President and Chief Operating officer of Luverne-based Super Foods, stands in front of an office wall filled with awards and recognitions and crowned with a photo of his adoptive father and mother, John E. “Jimmy” and Alyce Wilson. He says his parents’ giving attitude is his inspiration to give selflessly to the community.

Even as he spoke about being selected as The Luverne Journal’s Citizen of the Year, he spoke more of others – like his adoptive father and role model, John E. “Jimmy” Wilson, and his mother, Alyce M. Wilson – than he did of himself.

But his own accomplishments include much to talk about.

Wilson, President and Chief Operating Officer of Luverne-based Super Foods, is, among other things:

Most of those, he says, are positions that have just “fallen in my lap.”

“There’s been so any things we’ve been involved with locally and around the state and country that has touched our lives,” Wilson said, “but I’m not in it for the accolades.

“It’s just like my father used to say, ‘If you can’t leave this world a better place than it was when you came, there’s just no sense being here.”

And to that end, Wilson has given time, money and effort at nearly every opportunity.

Among others, he said he has donated to:

Wilson’s wife, Lillian Wilson, said John gives to almost any charitable organization that walks in their doors with a request. And she said he believes it’s only fair.

John Wilson said much of what he does, he does in hopes of living up to the Rotary Club’s “Four Way Test,” which is recited at each meeting as a measure of what to think, say and do.

“First, is it the truth? Second, is it fair to all concerned? Third, will it build good will and better friendships? And fourth, will it be beneficial to all concerned? If everyone lived their lives by those rules, the world would be much better off,” he said.

Crenshaw County Rotary Club President Yvonne Noble said she has only gotten to know Wilson in recent years, but had heard people talk about him long before she became president. She said every word has been proven true.

“He lives up to the Four-Way Test,” she said, “and from the little time I’ve been able to really get to know him, he truly lives up to the spirit of Rotary, which is giving back.”

She said the things he does are necessary for the community because of the impact they have.

“There are people in our community who need the help he believes in doing,” she said.

“He works with just about any organization that is in it to help people and that’s important.”

Noble said Wilson is a Rotary benefactor, a Paul Harris Fellow and a major donor.

“He gives liberally to anything involving Rotary,” she said. That includes the Rotary Funded Camp ASCCA, where Wilson serves as a board member and which he credits for some of his fondest memories.

He said he was visiting the camp for the first time one day, when a man of about 50 years of age approached him suddenly and hugged him.

“I didn’t know what to do,” he said. “I hugged him back. Later that day, after we were done with the tour, he came up to me and asked me, ‘Would you be my friend?’ I said, ‘Yes, I will be your friend.’

“It’s just one of those moments in your life where you’re touched by somebody else. He lives in his own little world, but he just wanted to know if I would be his friend.”

He said he has everything he could want and has no reason not to give back to his community.

“With all the stores we’ve had, I could have bought a huge yacht and a million-dollar house in Florida, but that’s not it,” he said.

“That’s not who we are. We’re so blessed. I’ve got four wonderful girls, a wonderful wife, a mother who lives next door to us who is 92 years old – what more do I need? If I can’t give back with all I have, that’s just wrong. If I didn’t have a penny in my pocket tomorrow, I wouldn’t care.”

And above all else, he said, he loves his community.

“As a child, I lived in Montgomery, and as a college student, I lived in Birmingham, but as far as my family now, you could not pick a better place to live in the world than Luverne, Alabama,” he said.

“People do not understand how wonderful it is to be a part of this community.”