Brantley baseball falls in 1A quarterfinals 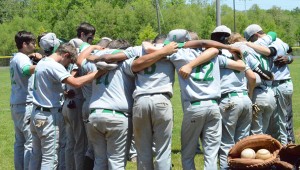 Brantley High School players gather and pray on the field before the season-ending third game against Fayetteville High School.

The Bulldogs finished the season with a 16-19 overall record; it is below .500, but head coach Greg Evans said it’s a moral victory after being 2-13 almost halfway through the season.

Everything changed, he said, when the team beat T.R. Miller High School, a Class 3A team ranked in the top 10, 15-5, ending the game via the 10-run mercy rule.

“That kind of opened everyone’s eyes as to what we could do,” he said, including players who had previously doubted him when he talked of their potential.

At the end of the regular season, it was down to the wire. The Bulldogs had begun to climb out of their early hole, but had to beat Geneva County High School twice in order to make the playoffs.

They did, entering the playoffs as area runner-ups before sweeping Florala High School and winning the second round series against Kinston High School, the area winners.

Against Fayetteville, however, he said simple errors cost the team a shot at the semifinals, losing 9-7 in Game 1 and 7-1 in Game 3. The team won Game 2 7-1.

Even with the losses, Evans said he is impressed with the team.

“When you’re 2-13, human nature would have said just let the season go by, but they took a stance and said, ‘We’re going to do something about it.’

“And they definitely did.”

Parrish said he thinks the team could have beaten Fayetteville, but looking back he’s proud of the season as a whole.

“We were looking shabby at the beginning,” he said, “but we made something out of it and proved a lot of people wrong.

Next year’s team, he said will have less experience and, thus, a “harder road,” but if they learn from this season and start strong, they will go far.

“If they get closer and work as a team, they can make it as far as we did this year, maybe further.”