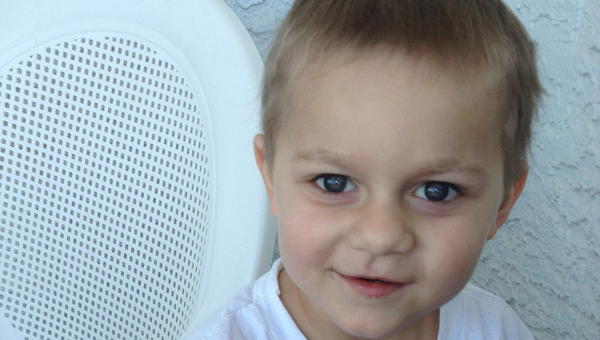 Nate Simmons was diagnosed with Acute Lymphocytic Leukemia on December 27, 2010. On Friday he will take part in the survivor’s walk at Butler County’s Relay for Life. (Courtesy Photo)

Nate Simmons is your typical 5-year-old.

He loves Spiderman, playing with his two older brothers and has a personality that often makes his parents laugh.

But Nate’s story is far from typical.

He was diagnosed with Acute Lymphocytic Leukemia on December 27, 2010. He began treatment to battle the disease that very day.

“The initial diagnosis devastated us and shook our family to its very foundation,” said Jason Simmons, Nate’s father. “When you hear the word cancer, it almost seems like you have an out of body experience. All future, hopes, plans and dreams go out the window for a period of time. Then something amazing happened. Within days of his diagnosis, our family, friends, church and even total strangers began to pray and lift us up. We began to gain the emotional and spiritual strength we would need for the journey ahead.   The people in Greenville were incredible. Kids, schools, churches, businesses began to have fundraisers and send money to defer our expenses. The love of Christ was surely shown to us through our community.”

But Nate and his family still faced a long road.

“For the first year we were completely isolated,” Jason said. “Nate couldn’t be out around people because of the constant risk of infection and sickness and our two oldest boys, Jackson and Chapman, often had to stay with grandparents, while Ashley and I were in the hospital. Our faith sustained us through this time of isolation.”

As Nate battled cancer, his journey began to shape his family.

“Strangely enough, the Lord has turned a terrible situation into a blessing,” Jason said. “We are a stronger family because of this experience. Our faith is stronger, our love for each other is stronger, and we have so much more love and compassion for our community and fellow man. Cancer profoundly changed who we were going to be. I am not the man I would have been if Nate hadn’t gotten sick. I feel like I am a better person because of what I have experienced.”

And Nate is better. Just less than four years from his initial diagnosis, he took his last treatment. He will have his port catheter in his chest removed in June, and will continue to have his complete blood count checked once a month for the next several years, but his cancer is in remission.

“Nate is still dealing with some of the effects of such a long treatment plan,” Jason said. “He is the strongest person I know, pain really doesn’t affect him. He just keeps moving forward. He has such a funny personality and is very witty for his age. In almost every way he is a normal kid now.”

On Friday, Nate and his family will take part in Butler County’s Relay for Life, which helps raise funds for the American Cancer Society. The money raised helps the ACS fund research and provide assistance to those in the midst of their own battle with cancer.

“Relay is a great way for us to support those who have faced this terrible illness or lost loved ones,” Jason said. “We count it an honor to be a part of this event. You never know how much you need other people until you face an illness like this. The people of Greenville have blessed our family so much and we want to bless them in return.”

Butler County’s Relay for Life will begin at 6 p.m. at the Greenville YMCA.