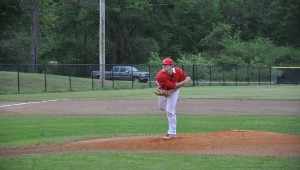 Junior pitcher Austin Odom returns to the dugout having kept the Gamecocks from scoring.

He’s tired, but he wants to win.

Odom continues the streak, culminating in a 7-0 win followed by a series-ending 9-7 victory.

A week later, Odom again rerouted the team’s playoff series with a 5-1 win over Zion Chapel High School in Game 2. He threw 14 strikeouts and allowed only one earned run on six hits and one walk.

Parks said it’s Odom’s skill, as well as his work ethic that’s made the 17-year-old junior a pillar on the team.

“Right now, Austin’s our number one pitcher, our three-hole hitter and we rely on him to be a leader on the team,” he said.

And his success has not gone unnoticed, even outside the team and its fans; Odom was selected as one of only a handful of players across all high school divisions to compete in the 2014 North vs. South All-Star Game in Montgomery on July 22..

“Coach had said I’d have a chance if I came back this year and played the same as I did last year. I guess he was telling the truth.”

Odom said he has been playing baseball since he was five or six years old, and while he plays football in the fall, as well, he sees baseball as his primary sport.

“I love both,” he said, “but it feels good to have the ball in your hand and have control over the game.”

It’s the pressure that gives baseball – and pitching in particular – such a thrill for him, but it’s a pressure that he says he hardly notices after so many years in the sport.

“With pitching comes pressure, “ he said. “The whole game is in your hands.

“You have to throw strikes and if you don’t, chances are you’ll lose. But it doesn’t even really cross my mind anymore.”

Parks said Odom will be recruited by college programs if he continues the way he has so far and is confident he could do well at the next level.

But Odom said that isn’t his priority.

“I’d love to play college ball if I got the chance,” he said, “but first, I believe in education. I think my college education is the first thing to take care of. A college degree will last you a lifetime.”

Parks said his diligence off the field is as strong as it is on.

“I think first and foremost, he’s got his head in the right place and his priorities straight,” he said.

“He’s on track right now to be valedictorian. He wants to be the best student he can be.”

And as a player, he’s no different.

“He’s one of those guys that every coach hopes he has the opportunity to work with,” Parks said.

Odom said he’s just enjoying the ride as long as it lasts and has his mind focused first on the playoffs and then on the All-Star Game, both of which will let him pit his skills against the cream of the crop.

“I’m excited,” he said, of the upcoming All-Star Game.

“I know some of the best players in the state will be there. It’s a different atmosphere for sure, but I’m looking forward to it and seeing what I can do.”