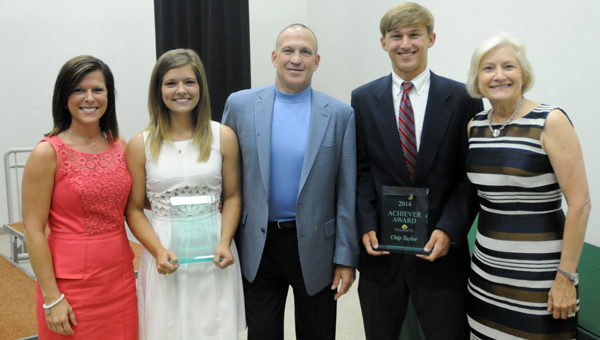 Chip Taylor has attended the Achiever Award banquet for nearly as long as he can remember.

He was there again Thursday night. But this time things were a little different.

“This is such an honor,” Taylor, a senior at Fort Dale Academy, said. “I’ve been coming here ever since I was little, and I’ve always looked up to the people who received the award. To win the award is just a tremendous honor.”

Taylor, and fellow Fort Dale Academy senior Hannah Johnson, who was the female recipient of the award, will each receive a $2,000 scholarship as part of the award.

Johnson said she was surprised to hear her name called as the award winner.

“It was crazy,” she said. “Each and every one of these people nominated is equally talented, equally smart, and equally deserving of this award. I’m really honored to receive it.”

Taylor was a three-sport standout at Fort Dale, who was a finalist for the Alabama Sportswriters Association AISA Basketball Player of the Year.

He earned first-team all-state honors from the ASWA and joined the school’s 1,000-point club during his senior campaign.

He also earned all-state honors in football and is the school’s career passing leader.

He said he plans to attend Huntingdon College where he will join the football team. He is undecided on a major.

Johnson was a member of Fort Dale’s basketball, softball and volleyball teams, as well as its cheerleading squad.

She was named to the AISA Class AAA all-tournament team and was selected as MVP of the softball team.

Johnson is a member of the school’s technology team, which recently won first place at the AISA Technology Fair. She is also a member of the drama club, the Key Club and Fellowship of Christian Athletes and serves as SGA senior class representative.

Johnson said she plans to attend the University of Alabama and major in nursing.

“Each and every one of these nominees is a role model for people in this community,” said Payne Meadows, Greenville Area Chamber of Commerce president. “It’s very impressive to see what they have already achieved. I know the judges had a difficult job selecting the winners.”