Fund set up to assist victims of fire 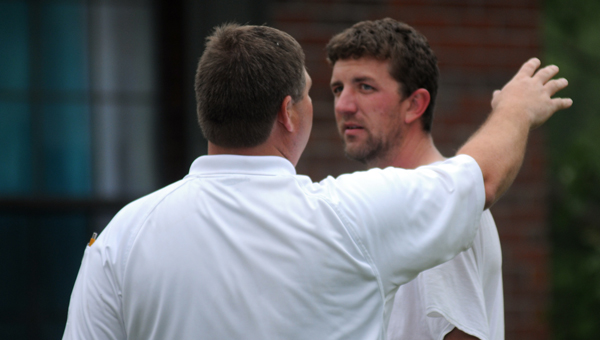 Greenville Fire Department Chief Chad Phillips, left, talked with Allen Grimes, right, as firefighters world to extinguish a fire at Grimes’ house Tuesday. The house been declared a total loss. Officials with the Greenville Fire Department helped create a fund at BB&T to accept donations to assist the family as it seeks to recover from the loss of its home. (Advocate Staff/Andy Brown)

A fund has been set up to help a family that lost its home in a fire Tuesday morning.

Officials have declared Allen Grimes’ house a total loss after a pair of fires destroyed the structure.

“We lost everything,” Grimes said. “There was really nothing that could be saved.”

Grimes said officials with the Greenville Fire Department helped create a fund at BB&T to accept donations to assist the family as it seeks to recover from the loss of its home.

“The fire department has been incredible,” Grimes said. “The chief and the whole fire department went above and beyond to help us. After the fire was out they stayed and helped pull things out that they thought might be salvageable and covered those things with tarps so they wouldn’t get rained on. They amazed me at how great they were. They did a great job. Everyone in Greenville should be proud to have a chief and a fire department like we have.”

The GFD was called to Grimes’ home in the early morning hours of Tuesday and battled a blaze in the laundry room as a cell of powerful storms pounded the county. Firefighters believed the fire had been extinguished, but were called back to the house around 9 a.m. By then, the fire was raging.

“There was a fire in the laundry room that we were able to get out, and we cut some sections out of the ceiling to make sure the fire was knocked out, and it looked like everything was taken care of,” Chief Chad Phillips said. “There must have been multiple shorts in the attic under the blown insulation that eventually led to the second fire. It was undetectable.”

Officials believe the fire was caused by electrical wires in the attic shorting out.

“The storm came through and ripped the patio cover off and it was tossed out toward the road and got into some electrical lines,” Phillips said. “It’s just my opinion, but it looks like that caused a short in the attic that started the fire.”

No one was injured in the fire, but Grimes and his family must now find a new place to live.

“The Red Cross put us up in a hotel for a couple of days, but we’ve got to find somewhere to go,” Grimes said. “We’re looking for a place to rent.”

Anyone with information on available rental properties can contact Grimes at (334) 662-9257.