Luverne, Brantley progress to third round of state playoffs 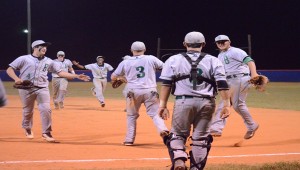 Brantley High School players celebrate during their game two comeback win against Kinston High School. The Bulldogs pulled the victory at the end of a back-and-forth game against Kinston, securing a place in round three of the Class 1A playoffs. At the same time, Luverne won Game 3 against Zion Chapel High School and will also progress to the quarterfinals.

The stories are eerily similar.

Two baseball teams from Crenshaw County are fighting to stay in the state playoffs and progress farther than they did in 2013.

Both teams flounder in the first game due to too many defensive errors, but bounce back in impressive second games to tie the series.

And both teams win Game 3 in emotional back-and-forth high-intensity showdowns decided in the final inning.

These are the stories of the Brantley High School Bulldogs and the Luverne High School Tigers in their respective treks to the Class 1A and Class 2A state baseball quarterfinals to be held this weekend.

Last week, the Bulldogs lost to Kinston High School 7-3, before returning for 5-1 and 4-3 victories in Games 2 and 3.

Brantley now holds an overall season record of 15-17 and Luverne a record of 19-7.

Brantley head coach Greg Evans said his is not quite a winning record, but considering his team’s season record fell to 3-15 at one point this spring, it’s a notable improvement.

Evans said the team has continued practice as normal looking ahead to this weekend’s series against Fayatteville.

Luverne head coach Andre Parks, however, said after studying his team and his opponent’s, the Tigers have been adjusting their bunt coverage and working on their ability to hold runners in the infield.

“From everything I’ve heard about Mobile Christian,” he said, “they’re very well-coached and have a lot of talent on their team. They swing the bat well, they run well and they’re good defensively.

“But I think our guys are up to it and I hope we’ll have a good home crowd on Friday and our guys will feed off that and meet the challenge.

Players and coaches for both teams bemoaned their first game losses before saying rough beginnings won’t cut it in the deeper levels of the playoffs.

“We got off to a slow start, but we just had to keep fighting and we pieced something together to win,” Brantley senior pitcher Clay Haws said.

“Our backs were against the wall, we knew it was win or go home, so we did what we had to do.”

Luverne sophomore pitcher Ke’vontae May said he hopes to kick this weekend off the same way the team ended the last.

“It’s like we’re not playing to win for some reason,” he said.

“Everyone’s really doubting us this weekend, but we’re going to show up with something to prove.”

Evans said the success of both teams is big for the community and he wants to see it last as long as it can.

“I’d love to see us and Luverne make it all the way,” he said.

On Friday, Brantley will face Fayatteville High School in Fayatteville for a double header at 4 p.m., with Game 3, if necessary, to take place at 12:30 p.m. Saturday.

Luverne will play a double header against Mobile Christian Academy in Luverne at 4:30 p.m., with Game 3 scheduled for 1 p.m. Saturday.