County avoids major damage during back to back storms 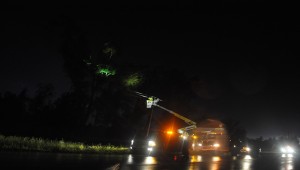 As lightning flashes in the background, workers repair power lines on Alabama 10 East in Crenshaw County late Tuesday night. Crews remained on call throughout the night Monday and Tuesday, responding to damage reports such as this one caused by a fallen tree. The wind, rain and thunderstorms that ravaged much of the state early this week left Crenshaw County relatively unscathed. Officials say weather patters should return to normal, sunny days through the middle of next week.

Violent wind, rain and lightning storms that swept across the state Monday and Tuesday all but missed Crenshaw County, officials said.

“There was no major damage, but the potential for damage was there.”

The storms affected hundreds throughout the Southeast, knocking out power in many cases, and destroying homes with tornadoes and floods in worse instances.

Three people have been reported dead in the state from tornadoes Monday night: Dorothy Jean Hollis, 60, and her son Carlton Earl Hollis, 34 both died in their Limestone County mobile home when it was lifted and crushed by the winds and 21-year old University of Alabama swimmer John Servati died in Tuscaloosa when a wall of the safe room in which he was sheltered with his girlfriend fell on top of him.

Weather.com reports 36 storm-related deaths across the Southeast from 80 tornado touch-downs between Monday and Tuesday.

Between both days, she said, emergency responders received 11 reports of trees down, two reports of power outages and no reports of property damage.

According to National Weather Service measurements, Crenshaw County residents saw up to five inches of rain in the county’s southern end, while the northern side took only two inches.

“The biggest thing we’ve had is some trees down, but as far as flooding, we haven’t had any reports at this time, but there could be issues we haven’t found,” he said.

“I’m very relieved. I don’t think we had quite the intensity of rain we anticipated, so I guess I was a little surprised there wasn’t more damage to the roads.”

He said portions of three dirt roads will remain closed in the county, but all three – Swanner Bridge Road, Fairview Church Road and Scrugham Farm Road – were closed after heavy rains received earlier in April and have needed more time to dry.

“I anticipate at least Swanner Bridge Road and Fairview Church Road staying closed for a while,” he said, “because it’s going to take a good several weeks of dry weather before we can fix them up again.”

Tomlin said the county fell under one tornado warning and two severe thunderstorm warnings Monday night and no warnings Tuesday.

Weather service forecasts call for sunny or mostly sunny skies through the middle of next week, but Tomlin said residents need to take the scare as an opportunity to prepare for future severe weather events.

“You need to have weather radios ready to go, make sure you have the right channels available and know where your safe rooms are,” she said.

“We just got really, really lucky this time.”