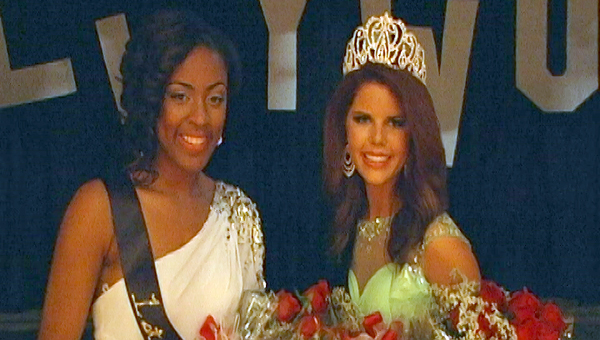 First runner up Jasmine Pressley, left, and the newly crowned Miss GHS Sellers Swann, right, were chosen out of a field of 16 contestants at the Greenville High School Auditorium Saturday night. (Photo Courtesy of Angie Long)

They were “Red Carpet Ready” in true Tinseltown fashion at Greenville High School Saturday night, as the 2014 Miss GHS got underway in the school’s auditorium.

The panel of three judges chose contestant No. 9, Jasmine Pressley, as first runner-up, with contestant No. 10, Sellers Swann, crowned the new Miss GHS for 2014.

Swann also won Most Photogenic, as well as the scholastic, poise and appearance and interview portions of the pageant.

During the event’s intermission, entertainment was provided by the Greenville Middle School Choir, under the direction of Shari Powell and Margaret West. Angelanette Brown performed “Beautiful,” with instrumentals performed by Matthew Gray on keyboards, Joshua Owens on drums and Preston Thomas on the saxophone.