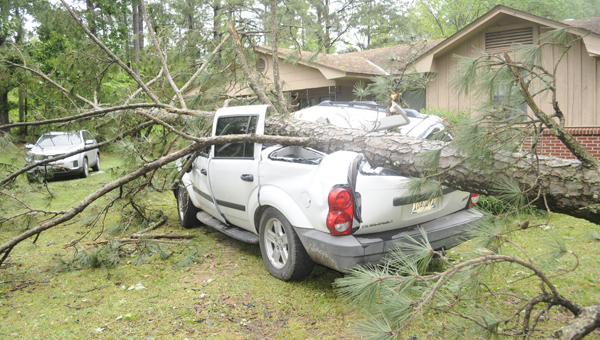 Tuesday morning’s storm caused a tree to fall on an SUV parked in front of a home on Starlington Road in Georgiana. (Advocate Staff/Tracy Salter)

A powerful storm cell swept through the area Tuesday downing trees and leaving thousands without power, and two Butler County families without a home.

Lightning from the storm struck a home on North Garland Road in McKenzie, which sparked a fire that resulted in a total loss of the house.

“Talking to the homeowner he said he heard a lightening strike,” Butler County Sheriff Kenny Harden said. “He thought maybe it hit a tree. He got to looking around and the house was filling up with smoke. They were all able to get out without anybody being hurt.”

In Greenville, Allen Grimes and his family watched their house burn down after his patio cover was ripped from the house and tossed into electrical lines, which fire officials believe led to wires in Grimes’ attic shorting out and starting a fire.

Grimes and his family were able to escape without injury.

According to Butler County EMA Director Shirley Sandy, no injuries have been reported.

The storm did knock down a number of trees, which caused damage to homes and cars in the area.

The storm also forced officials to close a number of school bus routes, and one of the Butler County School System’s buses was damaged when a tree fell on it while it was parked in the yard of the bus driver’s home on Poplar Road.

“Power lines are involved on all of the (bus route) closures,” said County Engineer Dennis McCall. “All the damages so far are due to straight line winds and saturated soil — primarily downed trees.”

The storms also delayed the start of the school day for the Butler County School System.