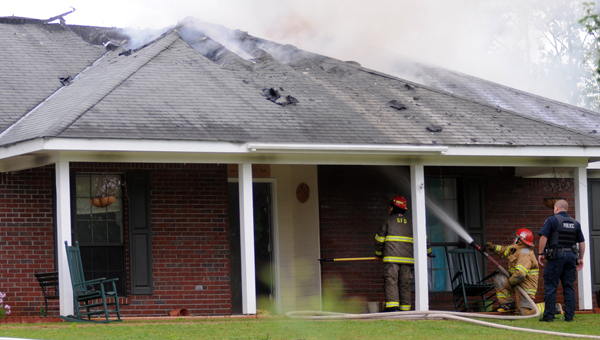 Firefighters with the Greenville Fire Department battle a blaze at a house on Fort Dale Road Tuesday morning. When first responders arrived on the scene flames were shooting from the roof of the house. (Advocate Staff/Andy Brown)

A Greenville home is being called a total loss after a Tuesday morning fire.

The house, owned by Allen Grimes, went up in flames shortly before 9 a.m.

By the time first responders arrived on the scene, the house was engulfed in flames.

“It’s a complete loss,” Grimes said. “It spread so quickly, by the time the fire department got here it was covered in flames.”

The fire that destroyed the house was actually the second fire of the morning at the location.

The GFD was called to the home in the early morning hours of Tuesday and battled a blaze in the laundry room as a cell of powerful storms pounded the county. Firefighters believed the fire had been extinguished, but were called back to the house around 9 a.m.

“There was a fire in the laundry room that we were able to get out, and we cut some sections out of the ceiling to make sure the fire was knocked out, and it looked like everything was taken care of,” Chief Chad Phillips said.

“There must have been multiple shorts in the attic under the blown insulation that eventually led to the second fire. It was undetectable.”

Phillips said when he arrived back at the scene shortly after the second call the house was engulfed in the flames.

“The whole top of the house was burning freely,” he said.

Officials believe the fire was caused by electrical wires in the attic shorting out.

“The storm came through and ripped the patio cover off and it was tossed out toward the road and got into some electrical lines,” Phillips said. “It’s just my opinion, but it looks like that caused a short in the attic that started the fire.”

Grimes said when he heard the storm rip the patio cover from the house he looked outside and saw the cover tangled in electrical lines near the road.

“It seemed like it had calmed down,” Grims said.

“I looked out front and there was a power line in front of the road. So, I drove my truck down there with the flashers. A cop pulled up and we were talking and when I looked up at the house, flames were coming out the top of the house.

“So that’s when I ran inside and woke up the kids and the wife and told them to get out of the house.”

No one was injured in the fire, but Grimes said his family has lost everything.

“You hear about things like this, but you can’t imagine it happening to you.”