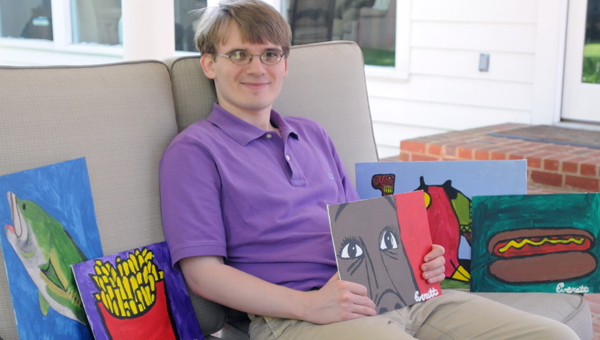 Everett Moseley, 24, is a talented artist with a unique sense of humor, and he lives with autism and diabetes.

His fun paintings are filled with animals, faces, and the occasional fast food menu item.  Vibrant and bold in color, his paintings have a life of their own and seem to catch the eye of all who see them.

Always fascinated with animals, Everett has the ability to explain himself though his paintings.

Everett’s love for painting blossomed when he started taking art in the ninth grade with Stacey Edwards.

“Everett goes down as one of my proudest moments in education,” said Edwards.  “To see the work that he has created though the years has been such a joy to me.  Although Everett had some disadvantages in school, he had all of the best qualities in an art student.  He did anything and everything I asked of him, and he did it to the fullest.  His paintings make people happy and you are instantly aware of his favorite things when you see his art.  His artwork speaks in ways that he is not able to.  That is what is so powerful about is work.”

He was diagnosed with autism when he was 4 years old, and Type 1 diabetes when he was nine. Even though his parents knew that something was not quite right as Everett was an infant, the news that their son had autism sent Cherry and Terry into a state of disbelief.  They felt concerned, worried, and uncertain of their son’s future.

But the worry and fear passed as Everett responded successfully to a structured and specialized program that included communication, behavioral and adaptive therapies.

His mother describes him as a loveable, fun and talented person to be around.

“Everett is such a blessing,” said Cherry.  “He really gets to people.  He is very fast, intelligent and has such a good work ethic.   Painting is relaxing to Everett and people seem to really like his work.”

Although Everett faces daily difficulties due to autism and diabetes, his desire to work hard and be the best he can be is evident.  He currently attends Lurleen B. Wallace Community College where he is completing his degree in computer aided design (CAD), he works part-time at Priester’s Pecans, and he is preparing for his first art exhibit and reception at the High Horse Gallery.

“His art is special in a way that only Everett can make it, from his interpretation of the subjects he paints to the titles of his paintings,” McKinley said. “Everett’s story is most inspirational and I believe that he has a bright future in the art world.  His talent is a gift to be celebrated.  Everett is a favorite among gallery visitors and I enjoy seeing the reaction his work gets when people see it.”

Art is among Everett’s many talents.  He also plays the saxophone.

Everett said he was in the band for eight years.

“I like to play ‘Amazing Grace’ and ‘I Surrender All,’” he said.

Everett attends First Baptist Church and has been asked to play, but said he needs to practice more before he’s ready to play in front of a large crowd.

Cherry said that her family is blessed.

“I ask myself what did we do to deserve such a gift,” she said.  “Autism really is a blessing because it lets us learn about the world and others in a way that we wouldn’t normally get to.”

According to the National Autism Association, autism spectrum disorder has no single, known cause.  Scientist believe genetics and environment may play a role.  It is estimated that about 1 in 68 children is identified with autism spectrum disorder.  ASD is reported to occur in all racial, ethnic, and socioeconomic groups, and is almost 5 times more common among boys than among girls.   Children with autism generally have problems in three crucial areas of development – social interaction, language and behavior.  Autism symptoms and severity can vary; two children with the same diagnosis may act differently and have different skills.

April is national Autism Awareness month and Cherry encourages people to educate themselves about Autism.

“Autism has many different levels and characteristics and each person is unique in their own way and may not have all of the signs and symptoms you read about,” she said.

Anyone interested in viewing or purchasing Everett’s paintings can visit www.highhorsegallery.com, or visit Everett’s art exhibit, Everett’s World, at the High Horse Gallery on May 1 from 4 p.m. until 6 p.m.