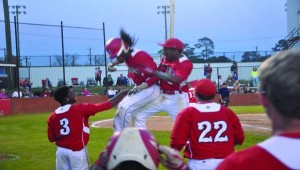 Kentarious Womack and Marcell McMillian jump in celebration as the Tigers retake the lead in a dramatic third game of the opening playoff series against the New Brockton Gamecocks Monday night.

A hard-fought weekend series brought the Luverne Tigers one step closer to a the shot at the state title players think they’ve earned.

After a four-point defeat to the New Brockton Gamecocks Friday night, the Tigers evened out the double header with a 7-0 win in game two, let by junior pitcher Austin Odom.

Game three on Monday night began slow, but heated up quickly – no runs were scored until the bottom of the third when Luverne put 6 runs on the board.

The next three innings belonged to the Gamecocks, however, with repeated errors costing the Tigers the lead when New Brockton scored its seventh run in the top of the sixth.  That’s when head coach Andre Parks gathered the players on the field.

“We’ve talked about how you can play two ways,” Parks said.

“You can play to win or you can play not to lose. I felt like New Brockton had taken the momentum and they were playing to win while we were relaxing with the lead and playing not to lose.

“So I told them let’s go out, play to win, and play baseball. They have to get six outs; let’s make them earn every one of them.”

The Tigers retook the field and scored three runs in the bottom of the sixth.

Senior Kentarious Womack relieved sophomore Kevontae May at the mound and allowed no runs, securing the win at 9-7.

Womack said he prefers a game of such high intensity.

“I feel great,” he said after Monday’s win.

“I wouldn’t have rathered sweeping them. That’s the real playoff experience.”

But Parks said playing the same way in the second round won’t cut it.

“As far as practice leading up to this weekend,” he said, “we’ve just got to get back to basics. I think we made more errors in this three-game series than we did in any week prior. In order to beat good ball clubs, we can’t make the mistakes we did this time.”

He said the Tigers will be put to the test in the second round of the state playoffs this weekend. It’s the same point the team’s championship goals were shot down last year.

Odom echoed Parks’s words, saying the Tigers would need to focus to win in the next round.

“We’ve got to practice harder, that’s for sure,” he said.

“We’re making way too many errors, we’ve got to take our preparation more serious and we’ve got to play better baseball.”

Odom, Womack and junior catcher Uriah Brown, said when Monday’s game began to turn sour, they realized what was on the line and know they don’t want to lose the opportunity this week.

“I think we got complacent scoring those six runs, but then it got to do or die time and you go big or go home,” Odom said.

“It took us getting down and seeing that this could really be it to motivate and turn us around,” Womack said.

Parks said he hopes the near-loss experience will push the team through the next round.

“I think we’ve got a bunch of guys who didn’t want the season to end and they fought to keep it going,” he said. “I hope that continues.”

The Tigers will play a double header against the Zion Chapel Rebels at Zion Chapel High School Friday at 4:30 and 7 p.m. with the tiebreaker game to be held at 1 p.m. Saturday.