Luverne junior runner up for basketball Player of the Year 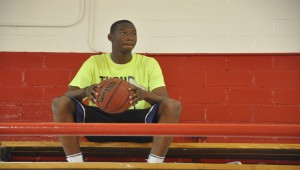 Luverne High School junior Donta Hall sits in the stands near the spot where his father died three years ago. He says that event and his father’s memory is what drives him to continue bettering himself in the sport.

There is no arrogance in Donta Hall’s face.

The sixteen-year-old 6’9” Luverne High School basketball star dunks over a friend with ease during a pickup game after school Tuesday, but as teammates cheered, Hall didn’t even break a smile. He just kept playing the game.

“A lot of times when kids this young get a lot of attention, their ego gets in the way and they don’t think they have to work as hard, but he’s been like that,” head basketball coach Richard Dorsey said.

And “attention” is exactly what Hall has received over the past season.

Hall will also play in the North-South All-Star Game in July and was runner up for 2A Player of the Year this season.

“It’s nothing major,” he said, to which Dorsey laughed.

“He just doesn’t realize how big it all is,” Dorsey said.

Dorsey said Hall’s height is a definite factor in his hardwood domination, but that he has worked hard and developed fundamental skills that complement that natural advantage.

He said it’s a determination derived from tragedy – on Nov. 30, 2010, Hall was moved up from junior varsity to B-team for his first game against Georgiana High School. Minutes after the game ended and before the girls varsity game could begin, Hall’s father, Donald Hall had a heart attack in the stands and was never revived.

“I was going to the locker room and some guys came in and said, ‘Go check on your dad,’” Hall said.

“I tried to go up into the stands, but a lady stopped me and said, ‘Don’t go up there.’ I could see him lying down and I just knew. I went outside and I started to cry.”

Hall said it took him a month before he could muster the strength to go back into the gym and he didn’t finish the season. But when he returned in his ninth grade year, Dorsey moved him to the varsity team.

“When he left,” Hall said of his father, “everything changed in my life. It was my motivation. I just decided to keep pushing forward harder.

“Before that, he was telling me, ‘Don’t give up on what you love.’ I carry that with me everywhere I go.”

Dorsey said if Hall signs with any of the Division 1 schools offering him scholarships to play basketball, he will be the first one to do so in the school’s history. He attributes that achievement to the inspiration Hall takes from his father.

Hall said he isn’t sure where he wants to go after high school; his focus is on the coming season. Finishing second for player of the year is another motivator for him, he said.

“I wasn’t disappointed, it was just that maybe he worked harder than me,” he said.

“So I’ve got to work harder next year for it. And I will do that.”

Dorsey said that the team will be losing the rest of its starting lineup, so he will be leaning heavily on Hall this season.

But he doesn’t think it will faze him. He said Hall’s level head speaks volumes about his character.

“Even with all the attention he gets,” he said, “he’s the ball boy for the football team. He’s always been a hard worker and willing to learn, always very coachable and always doing the right thing which is very important to me.

“Even with all the attention, he hasn’t changed.”