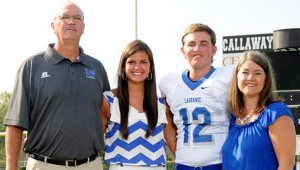 New Highland Home head football coach Claude Giddens and his family. Giddens is an assistant coach at LaGrange High School in Georgia, but was the Highland Home coach previously in 1996-2000.
From left to right: Giddens; his daughter, Whitley; his son, Zach; and his wife, Denise. Whitley is a senior at the University of West Georgia and Zach will attend Troy University in the fall as a freshman and walk-on quarterback.

The Highland Home High School football team will enter spring training May 5 with a new coach at the helm – or at least one new to the current team.

Greenville-native Claude Giddens, the Squadron’s head coach for the 1999-2000 seasons, will return to the school next month with hopes to lead the team to success on the field and off.

“I just want to build a relationship with each kid, earn their respect and help them become the best possible person,” Giddens said. “If we can do that, the football will fall into place.”

Giddens, who is retiring from his position as an assistant football coach at LaGrange High School in LaGrange, Ga., said he is looking forward to being a part of the Highland Home community, as well as being closer to his childhood home of Greenville. He said his sister, Ada Sue Thompson, still lives in the city and he is eager to revisit Southside Baptist Church.

The move will also keep him and his wife, Denise, close to their son Zach who will attend Troy University as a freshman and walk-on quarterback in the fall.

Highland Home Athletic Director Doug Bailey said it was Giddens’ experience that made him an attractive candidate, but that it was his passion for the lives of players – not just their football prowess – that sold the search committee on him.

“We hope that he can bring, obviously, winning football,” Bailey said.

Giddens said he will be relying heavily on the existing coaching staff to learn the ins and outs of the Highland Home players during the weeks of spring training, but he is confident he’ll learn the ropes quickly.

Three of the five assistant coaches, he said, played for him during his previous term at the school: John Hoffman, Doug Norman and Jonathan Jordan.

But, Giddens said, he’ll still be bringing his own flavor to the team’s training.

Giddens said he is eager to return and contribute to the growth of Highland Home.

“I’m going to be the head football coach,” he said, “but I really do care a lot about the success of all the athletic teams and al the students, no matter what they do.”

Giddens will be available to meet with members of the community at a meet and greet at the high school at 4 p.m. Saturday preceding the Parent-Teacher Association’s 6 p.m. Family Fun Night.