From the Big Apple to the Ritz Theatre 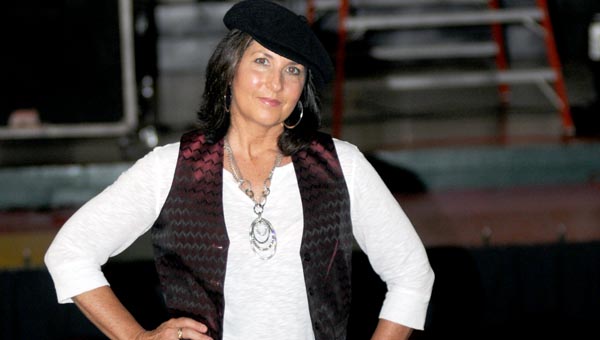 Sonya Rice’s love of performing led her to stages in Atlanta, Chicago and New York. She eventually found her way home to Butler County where she owns and operates Sonya’s Dance & Fitness.
She also serves as choreographer for the Greenville Area Arts Council’s Putting on the Ritz production, which opens Thursday night. (Advocate Staff/Andy Brown)

Sonya Rice is no stranger to the stage.

In fact, the former professional dancer’s love of performing began at an early age.

“My mother said she never could get me to stop performing,” Rice said. “I liked performing so much that when I was a small child, my father built me a little stage under my swing set. I’d take some of my mother’s drapes and hang them the swing set to make a stage curtain.”

But Rice wasn’t content to simply be on the stage. She needed an audience.

“I’d recruit other kids and teach them choreography and we’d pantomime to music that we’d play on a record player,” she said. “Then we’d charge other kids from the neighborhood a nickel or a dime to come and watch and when the show was over we’d split the money up and go by candy.”

Rice eventually moved onto bigger stages, bigger performances and bigger cities. Her love of dance and performing led her to Montgomery, Atlanta, Chicago and New York. She eventually found her way home to Butler County where she owns and operates Sonya’s Dance & Fitness.

Rice also serves as choreographer for the Greenville Area Arts Council’s Putting on the Ritz production.

Rice has helped create the dances for nearly every one of the annual performances, but she’s especially excited about this year’s show — The Magic of the Seventies.

Rice said the goal of the show is to highlight the music and dancing of the era.

“We don’t have real flashy costumes like we have in the past,” she said. “We’re wearing disco dresses, flared pants and platform shoes — the stuff we wore in the 1970s. But the music — it’s the music that’s going to grab people.”

This year’s show features songs such as “Fortunate Son,” “Spirit in the Sky,” “YMCA,” “Car Wash,” and “I Will Survive.”

Then it was just a matter of teaching the steps to the cast.

That came easier for some than others.

“When I tried to explain the Bump to some of the younger cast members, who are in high school or college, I got some strange looks,” Rice said. “It was a little awkward at first, but once they got it, they really started to like it. For the cast members that didn’t grow up in the 1970s, this is all new, and maybe a little strange.”

But practice has made (nearly) perfect.

“We’ve been working hard, and I think we’ve almost got it,” Rice said. “On Thursday night there will be some jitters, and then on Friday they will relax a little more, and by Saturday all the nerves will be gone and they’ll really have a good time on stage. I’m excited to see the performances. I really think this is going to be a fun show.”

Opening night of Putting on the Ritz is scheduled for Thursday at the Ritz Theatre in downtown Greenville. There will also be shows on Friday and Saturday nights. Shows will begin each night at 7:30.

Tickets are available at The Pineapple, McFerrin’s Jewelry and The Medicine Shoppe. The cost is $20 for adults and $15 for students.