A girl and her pony 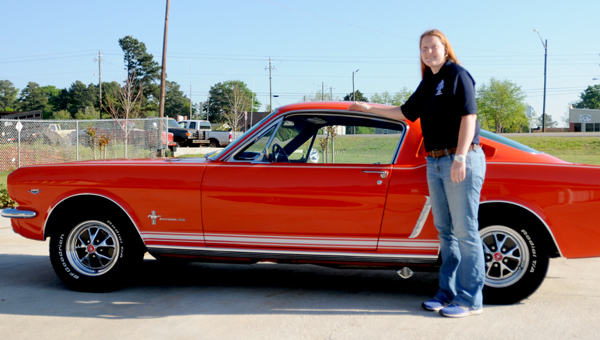 Like many girls, Kayla Garlock grew up dreaming of owning a pony.

But the Butler County native didn’t want the typical pony that neighs and munches on hay.

No, she had her heart set on a pony that purrs and guzzles high-octane gasoline.

In September, her dream came true.

She is now the proud owner of a 1965, poppy red Ford Mustang fastback.

Stuffed under the hood of the pony car is a 289 cubic inch engine that Kayla’s father, Wayne Garlock, admits has been “beefed up a little.”

The thought of the added power just makes Kayla smile.

Kayla said she can’t remember when she first fell in love with vintage Mustangs, but she’s sure it was love at first sight.

“I guess I’ve always liked them ever since I saw a picture of one,” she said. “I like the way they look, and the way they are built. I think they’re built a lot better than cars today.”

Kayla’s Mustang is certainly a head turner with its shiny paint job and sparkling chrome wheels, which she admits she washes and polishes regularly.

“I get a lot of thumbs ups when I drive it,” she said with a smile. “People honk the horn and roll down their windows and yell to me how they like the car.”

This weekend Kayla is planning to enter her prized pony car in the Bama Coast Cruise car show — an event that’s billed as the biggest and best outdoor car show in the state. Organizers are expecting several hundred classic cars to flood Main Street at the Wharf Resort & Marina in Orange Beach.

It’s the first show that Kayla has entered her car in, and she’s hoping to drive home with a trophy.

“There’s a category for (car owners that are) 25 and under, and I just barely qualify for that one,” she said. “The car that won (in that category) last year didn’t even have a paint job, so I’m hoping I’ll have a chance to win.”

But regardless how the car finishes in the show, Kayla already has her prize.

“This is my dream car,” she said. “I plan to keep it forever. I can’t ever see myself getting rid of it.”