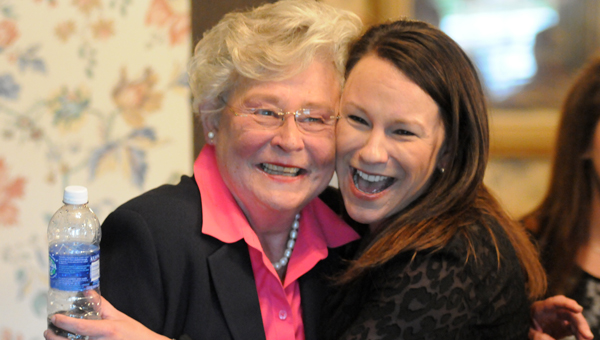 There is a long tradition of the U.S. Rep. from the 2nd District of Alabama serving on the both the House Armed Services Committee and the Agriculture Committee, in keeping with two of the largest interests in the area.

When Martha Roby was first elected to Congress, she lobbied hard for those committee appointments. But, during a visit to Greenville on Thursday, she said when she got the opportunity late in 2013 to move to the Appropriations Committee, she decided she could be a much more influential voice for Southeast Alabama in a new role.

The Appropriations Committee makes decisions about federal discretionary spending – that is, those items that, unlike Social Security and Medicare, aren’t automatic.

“We have 12 subcommittees, and I’m serving on three,” she said, adding that those are Labor, Health and Human Services, Education, and Related Agencies (Labor H); Military Construction and Vetarans’ Affairs (MilCon/VA); and the Legislative Branch subcommittee.

“MilCon/VA is extremely important to Alabama,” Roby said. “Alabama’s Second Congressional District has the fifth highest number of retired veterans, as districts go in this country.

“It is helpful to me to understand the challenges facing that process, and to legislate, streamline cases, and help veterans get as much expedient response as possible. Part of that is also military construction, and we all know the infrastructure of Ft. Rucker and Maxwell is vitally important to our communities and to the military.”

As a member of the LaborH committee, while preparing for a hearing, she learned that OSHA has targeted auto suppliers in Alabama, Georgia and Mississippi, allegedly because of the high rate of accidents and deaths surrounding manufacturing in Alabama. However, she said, the data doesn’t support the claim.

“I was able to question Secretary Perez from the Department of Labor about this,” she said, adding that he “artfully dodged” the question.

“The reason I bring that up is because oversight matters,” she said. “It appears, sometimes, as if there is nothing we’re doing in Washington to benefit business. This practice (by OSHA) could be very harmful as it relates to businesses in Alabama.”

Roby said she will continue to seek information about this, until OSHA can satisfy her questions.

“Any time a government agency wants to treat similar businesses differently, there needs to be high bar in justification,” she said.

Similarly, she said, the Army’s plan for reconstruction will play out through the Appropriations Committee, adding this could be very important to Alabama’s military interests.

Roby said if Congress cut every single discretionary appropriation, it would still have deficit spending, adding that at some point this must stop of the country will be bankrupt.

“Or, we could actually reform those,” she said. “In the budget I just voted for last week, there were suggestions of how we could go about reforming mandatory spending programs. Our commitment remains with those 55 and older. But there are choices for seniors, who wouldn’t have to remain enrolled in the programs.”

Reform, she said, will take real political will.

“None of you have seen come out of Washington, have you?” she asked. “Dealing with the leadership in the Senate and the White House makes it a little difficult. But for you, your kids and grandkids, we have to stay on course.”

During Thursday’s visit Roby met with administrators from the Butler County School System, Mayor Dexter McLendon, officials with Ozark Materials and the Greenville YMCA. She also spoke at a rally hosted by the Butler and Lowndes County GOP.