Amid the heat of fast-approaching June 3 primaries and the countless dollars and hours devoted to local campaigns, drivers in Luverne may notice a sudden drop in political signage.

At a city council meeting Monday night, Mayor Joe Sport placed a special emphasis on enforcing an old ordinance that has been ignored during recent election cycles.

“You’re not supposed to have signs out there for anything,” Allen said, “from yard sales to political signs.”

He said the ordinance has not changed, but enforcement has been lax.

“It’s becoming more prevalent at this time with all the politicians coming out and campaigning.”

Councilman Jerry Sipper said the city’s leniency has been abused and the abundance of signs reflects poorly on the city as a whole.

“I’ve had several people come tell me it just doesn’t look good,” he said. “It gives us a bad image.”

Sport said the city could not infringe upon private property, but would increase enforcement of the ordinance to reduce visual clutter along city roadways.

“If it’s in somebody’s front lawn and they don’t mind the eyesore, I suppose we won’t do anything about it,” he said, “but on our right of ways, w don’t need that.”

Allen said both police officers and street department personnel are authorized to remove any signs they see in violation of the city ordinance. He advised using sidewalks as a determinate for sign placement.

“If it’s on the other side of the sidewalk from your house, it’s probably illegal,” he said.

He said that all signs seen on city-owned poles and rights of way will be confiscated, but no fines would be levied because it would be impossible for officers to determine the source of the sign’s placement.

“If a politician hands me a sign, he’s not responsible for me putting it in my yard, I am,” he said.

At the meeting, Sport also spoke on the decorative clock at the corner of Forrest Ave and Fifth Street downtown, which he said needs to be repaired by the Cincinnati-based manufacturer, but may not include a new chiming/music mechanism.

Further discussion on the cost, extent and timetable for repairs was tabled until the mayor could obtain more information.

The council also heard departmental updates, but voted on no new resolutions or ordinances. 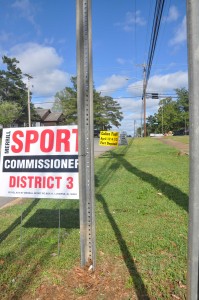 Political ads and event signs line Alabama 10 near downtown Luverne. Signs like these on public utility poles and rights of way will be removed on sight, Police Chief Paul Allen said.