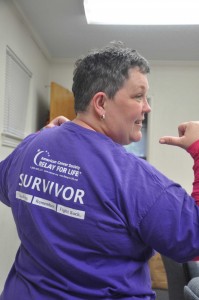 Lillian Wilson, a six-year cancer survivor, wears the shirt she earned at a Relay for Life Event in 2008, just days after she was declared cancer-free.

The sentence is chilling, she said, because it sends a person’s mind immediately to the worst possible outcome.

“My first reaction,” Wilson said, “was ‘Oh, my gosh, I’ve got cancer.’ Then that turned into ‘what’s going to happen to my kids?

“You go straight to the worst conclusion, but I know I’ve got four girls and you want to be able to live to see them get married and have children and live happy lives.”

It was Jan. 2, 2008 when she was first told of her cloacogenic carcinoma, a highly aggressive form of rectal cancer.

Now, Wilson, 51, has been cancer-free for six years and though she says she will probably live with residual effects for the rest of her life, she’s thankful for every moment.

“This is stuff that I just have to deal with,” she said.

She said the massive amounts of radiation to her pelvic area caused irreparable damage to reproductive organs and means that even today there are foods she cannot eat.

But her husband, John Wilson, said none of that has stopped her from loving life.

“I can’t begin to understand how she feels even today with the damage the radiation did to her,” he said.

“But she took it all in stride. I couldn’t handle it as well as she has.

“She doesn’t complain, even with all the issues she still has to face, she keeps a smile and enjoys each day more and more.”

John said the three words he heard hit almost as hard as those the doctor told his wife.

“You just hate to hear those words, ‘I’ve got cancer,’” he said.

He said he is grateful for the support his family found in the community among others who had faced similar trials.

“Especially for Lillian, it’s almost like a support group,” he said. “You’re in a very select club of people who have had cancer and battled it and won. It’s almost like they have a special bond.”

Lillian said the most important thing is attitude.

“When you hear the words, ‘You have cancer,’ you go into attack mode,” she said.

“You want to do whatever you can to get it out of your body; you want to fight and destroy it.

“There’s going to be days you feel like you can’t do it and that’s OK, as long as you don’t let it keep you down.”

This year marks Lillian’s third on Crenshaw County’s Relay for Life committee where she serves as the chairperson for the survivor’s dinner. She said it’s a position she asked for because she couldn’t eat most of the food available at the first survivor’s dinner she attended.

John said he was raising money for the American Cancer Society (Relay’s parent organization) many years before Lillian was first diagnosed, but that her fight with cancer gave an extra push to his efforts.

Last year, his team was the top money raiser, though he takes none of the credit.

“It’s everyone working together to make a difference,” he said.

But the main attraction for him, he said, is the survivor’s walk, a ceremonial lap in which all the area’s cancer survivors, including Lillian, are honored.

“It sounds corny,” he said, “but a lot of people say they have heroes; well, she’s one of mine.”