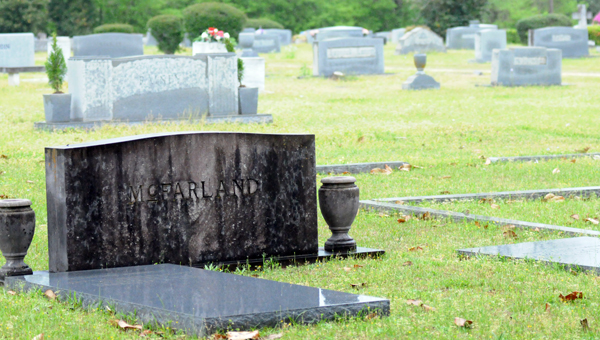 The Greenville City Council has laid to rest any confusion over the rules and regulations governing the city-owned cemetery.

At Monday night’s council meeting, officials passed a resolution outlining the policies for Magnolia Cemetery. Many of the policy changes deal with cremation and decorations at the gravesite.

City Horticulturist and Cemetery Superintendent Jennifer Stinger, along with council members Ed Sims and Bryan Reynolds, was charged with updating the policies.  She said the need for the changes arose in part because of the increasing popularity of cremation.

“We started having more and more people call or come by that had an interest in cremation and it was something we needed to address,” Stringer said.

In the past, the city’s policy was one burial per 5-foot by 10-foot plot, whether it was a traditional burial or a cremation.

“I talked with Auburn, Huntsville, Mobile and Selma to see what their policies were in regard to cremations and the number of burials in a single plot, and most allowed two cremations per plot,” Stringer said. “As we looked at it, it just made sense for us to allow that.”

The city also addressed the issue of decorations at the cemetery.

Under the new regulations approved Monday night, the city authorized the horticulture department to remove floral arrangements that become unsightly and are no longer respectful to the memory of the deceased or the beauty of the cemetery. Urns, boxes, toys, trinkets or ornamental figurines will not be permitted on the graves.

Permission must also be granted by the city before flowers or shrubbery can be planted.

“Decorations around the graves were not supposed to be there, but we’ve never made them take them off in the past,” Stringer said. “What we are hoping people will understand is that we have to maintain the grounds, and that involves lawnmowers and Weed Eaters. I understand why people put those things there, and we don’t want to take them away, but there’s a chance that they could be broken during the upkeep of the grounds.”