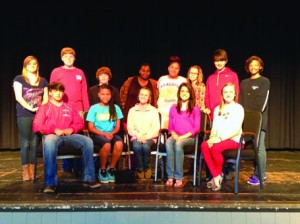 Hope Davis wants to be in the movies.

She’s in tenth grade at Luverne High School and has only ben in one public performance, but she knows she can reach that dream, and this week she’ll get another step closer.

The play, a 35-minute one-act murder mystery comedy will have more than a dozen students playing off-the-wall characters attempting to figure out who killed Patrice, (seventh-grader Raye Duhart), one of Eric’s (12th-grader Michael Pike) six ex-wives.

Jones said everything in the play, from the backdrop to costumes, the set design and line-coaching is done by students, almost all of whom have never acted.

“Most were very bashful and nervous at first,” Jones said. “But I’ve seen them change and be a lot more confortable.”

Jones said this is the second year the school has held a drama elective and Davis was the only student who returned for a second year.

Davis competed last summer in both regional and statewide acting competitions with a short duet she wrote, directed and performed with a friend.

The pair received the highest score in the regional competition.

“I love crafting things,” she said.

“I’ve written some plays, screenplays, sketched out ideas for a show even through the whole first season.”

In “Dramatic Re-enactment,” Davis plays the garden lady, part of a gardening club trapped in a hotel until the murder mystery is solved. Davis said the character is eager to leave resolve the search so she can resume her strawberry picking.

But the character is also a little crazy, she said, which makes it fun for both herself and the audience.

“She keeps saying she needs to go walk her orchid,” Davis said. “And the garden lady is not the craziest one in the play.”

The play will be held in the school’s auditorium and Jones said that although it’s billed as a “friends and family performance,” it’s open to the public and free of charge. She said she will be accepting donations at the door that will be used for continued funding of the school’s drama program.

“I think a lot of the things we do in this class are producing skills they’ll need wherever they go in life,” she said. She said those skills include social interactions and teamwork, confidence and clear communication skills.

“Being in this class really does help me come out of my shell and learn a lot about theater and acting,” she said.