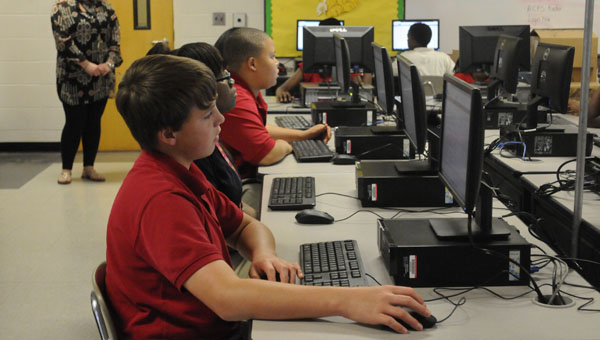 The older fixtures of Greenville Middle School computer labs and classrooms now have some company in the form of shiny new computers — 49 of them, to be exact.

Thanks to a Title I grant, Greenville Middle School received 38 desktops and 11 laptops to be distributed in various classrooms and labs around the campus.

The heaviest concentration of new systems will be placed in two of the sixth grade computer labs, which contain the largest number of stations in need of updating.

Additionally, a handful of others will be placed in computer labs for seventh and eighth grade labs.

Greenville Middle School librarian Deedra Benson said that it’s been quite a while since the school received so many computers at once.

“We receive some funding from Title 1 each year, and that number has dropped significantly because funding all-round has dropped,” Benson said. “So we had to pinpoint exactly where we wanted to put the money, and with testing being a focus and computers and technology being a college career idea for us, we decided that would be something that we felt like we couldn’t go wrong with.”

The new systems couldn’t have come at a better time, as students in grades 5-8 are using practice exams to prepare for a series of computer-based standardized tests.

But even without factoring in the need to develop computer-based testing skills, Benson is confident that the new computers will have tangible and intangible benefits for students long after they’ve left the halls of Greenville Middle School.

“I think it will have a great impact because technology has become such a big thing for all subject areas and their daily lives and routines,” Benson said.

“When they go to college, they’re going to have to be able to use technology in their daily routines and also in the routine of any job that they may choose to go into, even if they don’t go to college.

“You see it wherever you go, and that’s one reason why we decided to go on technology.”