County cracking down on litterbugs 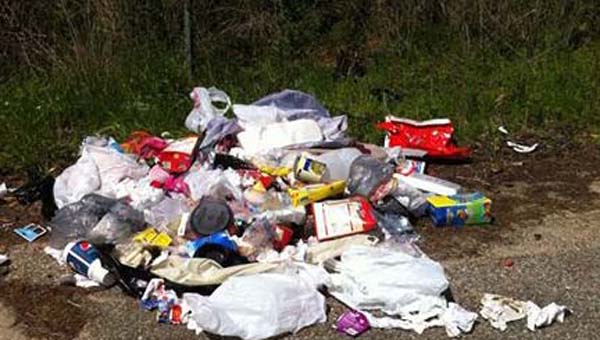 Illegal dump sites, such as the one pictured, can be found across the county. Those found to be responsible for such sites can be charged with illegal dumping, which carries a $500 fine and possible jail time in Alabama. (Courtesy Photo)

Butler County Sheriff Kenny Harden has a message for litterbugs.

“Illegal dumping is a big problem across the county, and it’s a constant problem,” Harden said.

Piles of household garbage are a common sight at illegal dumps in parts of Butler County, as people try to avoid the costs of landfills and trash collection.

Harden said that if deputies spot an illegal dump site, they will search through the trash for a piece of mail or a bill that will let them know where the trash came from. Those found to be responsible could be charged with illegal dumping, which carries a $500 fine and possible jail time in Alabama.

Harden said deputies were recently called out to a dump site and were able to find a name on a bill in the trash that was scattered along the side of the road.

“In this particular case, she didn’t have trash service,” Harden said. “She got somebody to carry off her trash for her and rather than disposing of it properly, they tossed it out on the side of the road. If someone is going to carry your trash off for you, make sure you know where he is going. If they dump it illegally and we find your name in it, you’re responsible. You can be charged with criminal littering and are responsible for cleaning up the site.”

“It looks bad when we bring in businesses who are looking to locate here and there’s trash all along the road,” McLendon said. “I had folks from Zaxby’s here a while back and I was showing them around town, and when we got to Manningham Loop I wanted to reach over and cover the lady’s eyes because of all the trash that was scattered around on the side of the road. It just doesn’t give a good impression of your city and community.”

Butler County officials are encouraging citizens to join in an effort to clean neighborhoods, roadsides and highways.

The Butler County Commission has declared April 19-26 “Don’t Drop It on Alabama” spring clean up.

People Against a Littered State will provide trash bags to individuals or groups who agree to clean up a neighborhood or stretch of roadway. The bags are available at the Butler County Road Department or the Butler County Sheriff’s Office.

“Anyone who wants to help can come by and get a trash bag and when they are finished they can just tie it up and leave it on the side of the road and we’ll come around and pick them up,” Harden said. “We just ask that they tell us what road they are going to clean up so we can make sure and get the bags picked up before someone or a dog tears into them and scatters the trash again.”

Butler County Commission Chairman Frank Hickman said the program is an easy way for citizens to make an impact on the county.

“It’s an opportunity to beautify the community with just a little bit of effort,” he said. “We hope we have good participation.”

Individuals or groups interested in taking part in the clean up can contact the Butler County Sheriff’s Office at (334) 382-6521.