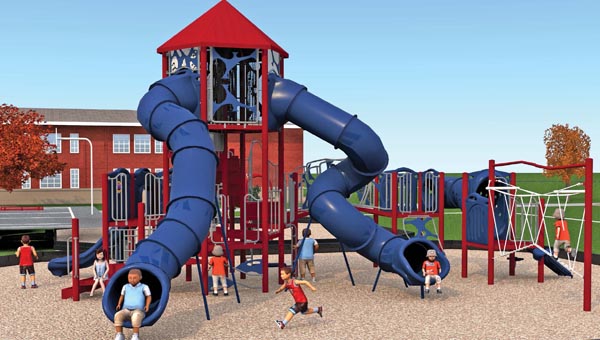 Fort Dale Academy board members have approved a complete remodeling of the school’s playground facility, which is scheduled for completion next fall. Pictured is a rendering of the proposed playground. The actual colors of the playground equipment will vary from the rendering. (Courtesy Image)

One of the oldest cornerstones of Fort Dale Academy is receiving a facelift after nearly four decades of service.

FDA board members have approved a complete remodeling of the school’s playground facility, which is scheduled for completion next fall.

Engineering company Goodwyn Mills and Cawood, Inc. of Montgomery recently surveyed the property and, in addition to the construction of the new facility, drainage issues will be corrected at the playground site.

Though the estimated cost of the project is currently unknown, the playground equipment installation will cost approximately $110,000.

Headmaster David Brantley said that a combination of aging equipment and drainage concerns makes it an ideal time to consider renovations.

“This is to replace the existing playground, which has benefited hundreds and hundreds of children, but it’s really past time for an update,” Brantley said.

“Some of the playground equipment that’s out there probably was put out there when the school was built, or over 40 years ago.”

The construction was also an opportunity to make sure future playground equipment was up to today’s standards, both from a usage and safety perspective.

And, according to Brantley, playgrounds have never been more vital to the lives of youth.

“Playgrounds encourage physical activity, but much of the design now is to help children with coordination and it helps from a fitness standpoint, so we’re excited about getting this provided for our students.”

Stacey Edwards, co-chair of the FDA board, said that the desire to renovate originated with the PTA’s request to the board.

“Amy O’Connor, our PTA president, along with Jaimie Sessions, myself and Ann Steiner Gregory, who’s also a board member, initially got together at the beginning of the school year and decided this was what we would push,” Edwards said.

“We all have elementary-age children, and it was just something that desperately needed to be done.”

Fundraising efforts for the new facility began earlier this year with a successful cookie dough sale that brought in close to $10,000, but the incoming spring brings a number of other fundraising efforts to recoup costs.

FDA is holding its annual fun run, which is a mile-long run that sees children of various ages competing for medals in each division.

The largest of the spring fundraisers is May’s Draw Down, in which community members can purchase a $100 chance to win $8,000 and two $1,000 chances.

Though plans for the new facility are well underway, the majority of the effort has barely begun.

“These fundraising efforts are going to be over a five-year period, so we’re just hoping to do enough in the next five years to pay for it,” Edwards said. “No tuition money is going toward the playground — this is all completely grassroots fundraising.”

The FDA board is still looking for door prize donations for the Draw Down, as well as volunteers to help with the Fun Run.

Details about the project and fundraising activities can be found on the Fort Dale website at www.fortdale.com, and contributors can also help via the crowd-funding effort at www.gofundme.com/theplayspace.