Sipper reflects on nearly a century 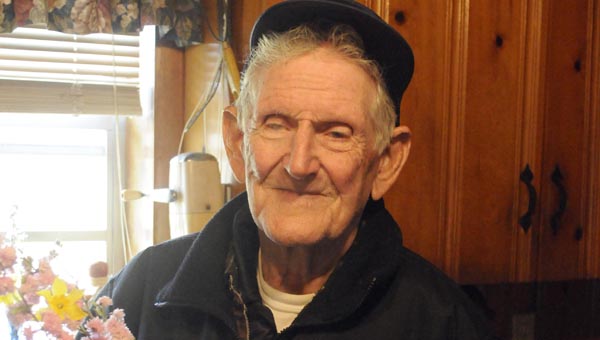 Ray Sipper, 91, frequently makes bouquets for his wife, which he delivers during visits to the nursing home. (Advocate Staff/Jonathan Bryant)

Alabama in 1941 was a far cry from the world today.

Most public facilities were still segregated, the average cost of a gallon of gas was 12 cents and the United States was preparing to enter the costliest war ever waged (in more ways than one).

But for Greenville resident Ray Sipper, it was a year like any other.

Or it would’ve been, except for the fact that the then-18-year-old’s first poem, written seemingly on a whim, was published in The Luverne Journal.

The poem detailed a typical squirrel hunt involving Sipper and his two friends, Doc Norman and Ulyss King, and served as a simple, if thoughtful, reflection on Southern life.

Of course, none of those things occurred to Sipper as he was writing it.

“I went squirrel hunting one day and I just started writing. I don’t know why.  I made up a lot of junk,” Sipper, now 91, joked.

“I just wrote that for fun.  I’d just pick out something that I wanted to write about, and I’d just write it, and I got a lot of remarks on them.  But I don’t think I ever got anything published — at least, not that I can remember.”

It’s one of the few things that Sipper has difficulty remembering, as even the most minute detail of the 73 years since can be recalled with startling accuracy.

He remembers moving around central Alabama roughly every five years, bouncing around between Patsburg, Petrey, Live Oak, Highland Home, Luverne and others.

He remembers a childhood filled with hobbies, including poetry, hunting, basketball and more.

But mostly, he remembers dominoes.  Unfortunately, it is becoming an increasingly distant memory.

“I still love to play dominoes, and we had it right up the street at this old community house until about three years ago,” Sipper said.

“There were five of us, but all the rest of them are dead and gone.”

He’d spend a number of afternoons playing with the younger members of his local church.

“I played volleyball up until two years ago.  All of these younger folks — the next oldest was probably 30 — played until they decided the year before last that they’d had enough, so they all quit.  That was so much fun, playing with those young’uns.”

These days, Sipper spends most of his time keeping house.

If he isn’t making bouquets for his wife during nursing home visits, he’s likely tending to various birdhouses and birdfeeders around his yard.

Regrettably, neither hunting nor poetry appeals to him any longer.

The latter is something that he hasn’t thought about much since those teenage years.

When asked about what happened to his interest in hunting, Sipper’s answer was short and simple.

Though Sipper can’t get out and about like he used to, he said that he has a wonderfully supportive community that helps him when they can.

Though he’s lost a lot of important people in his 91 years of living, it’s clear that he’s found quite a few more.

“I’ve got a good neighbor over there, and he’s a buddy of mine,” he said. “Whenever I get ready to go to town, I go get him to buy groceries and whatever.  These ladies around here, at least once a week and sometimes two times a week, they’ll bring me lunch or supper.”

In nearly a century of living here in Butler County and the surrounding areas, perhaps the one thing that Sipper has learned is that the more things change, the more they stay the same.