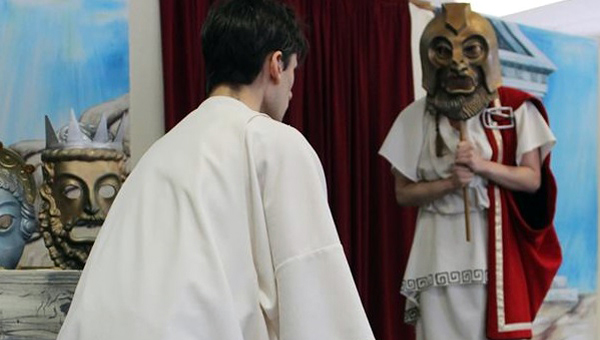 The Hampstead Stage Company will present a theatrical performance of “Hercules & The Heroes” Wednesday at the Greenville-Butler County Public Library. (Photo Courtesy of Jerrad Aker)

The Hampstead Stage Company will be making an encore appearance at the Greenville-Butler County Public Library.

The travelling theater company, which performed an adaptation of “The Secret Garden” at the library last July, will present a theatrical performance of  “Hercules & The Heroes” Wednesday.

Kevin Pearcey, director the Greenville-Butler County Public Library, said a desire to foster a love of the arts in the community and the positive response he received following last year’s performance were key factors in inviting the group back.

“We had a great response when they were here last summer doing ‘The Secret Garden,’” he said. “Both the children and parents enjoyed it immensely. While the response we had was a factor, having them here also goes to our mission as the library to offer a variety of quality programs here for families. As can be expected, we’re big proponents of the arts here at the library and I think it’s important to expose children to the theater and arts in general.”

The New Hampshire-based Hampstead Stage Company is a nonprofit organization that is well known for brining quality professional theater acts to schools, libraries and communities across all 48 continental United States.

The organization’s goal is to educate young audiences and to spread an appreciation of classic literature through theater.

Pearcey said that through mask work, poetry, and swordplay, children will discover the early stories of Greece.

“As Dwayne ‘The Rock’ Johnson has a film coming out in July about Hercules, the timing couldn’t be more better for children who are interested in the classical heroes of Greek mythology,” Pearcey said. “The unique thing about Hampstead Stage is that they build and bring their own sets and it’s two actors performing a number of different characters. They also get children involved in the performance and do a good job of interacting with the audience. These are some talented young people who put a lot into their craft.”

Wednesday’s performance will be held at 4 p.m. Admission is free.