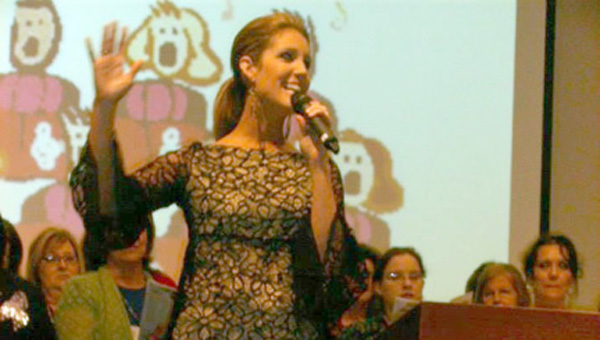 The “Be Still” women’s conference sponsored by Crenshaw County Women for Christ was held March 8 at South Luverne Baptist Church.

Nearly 300 women, representing 87 churches from Crenshaw County and the surrounding area, attended 8th annual conference, which is sponsored by the interdenominational fellowship of women.

Haley Spates, a music teacher in Shelby County, returned to lead those in attendance in worship.

According to event organizers, a highlight of the day was the women’s choir, which was recruited and assembled during the conference.  Spates rehearsed with the 52-member choir during the lunch break and led them in an arrangement of “Still,” written by Reuben Morgan, during the afternoon session.Early in the conference, special recognition and gifts were given to the oldest participant, the youngest girl, and to the woman who lived the furthest distance from Luverne. In addition, more than 180 door prizes, made available by donors, both merchants and individuals, were given away.

Each year, a part of the program is set aside to be still.  Women were directed to scripture printed in the program and were encouraged to meditate on the verses and pray during the time of silence.  After the quiet time, Nancy Petrey played “In the Garden” and two other piano pieces.

Lauren Kitchens Steward, who spoke at the 2009 conference, was invited back to be the speaker this year.

Organizers said the audience responded quickly to her sense of humor and her singing.

She spoke about preparing for the days ahead, using the account of Mary and Martha in Luke 10:38-42, offering encouragement to take time to be still and sit at the feet of Jesus during busy, hurried, and sometimes overwhelming days.

Shelia Jackson and her accompanist, Henry Terry, performed during the morning and afternoon sessions and played a “stirring” rendition of the spiritual “Keep Your Hand Upon the Plow.”

Jackson, who also performed at the first CCWC women’s conference in 2007, is director of Public Relations and Tourism for the City of Troy.