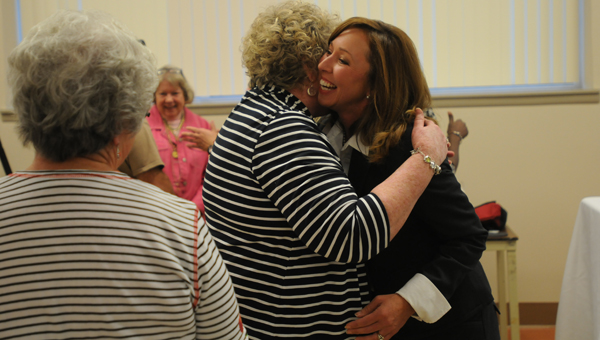 “I won’t be able to wipe this smile off my face,” Bryan said following the vote.

The board approved a three-year contract that is set to begin on April 1. It will pay Bryan $135,000 a year.

Bryan said while she is relieved to have been chosen to lead the district, there’s much work to do be done.

Bryan said she also wants to make sure that teachers and support staff are excited to work for the school system, and she wants to engage community members.

“I want people to be proud of our schools and I want us as educators to provide the most opportunities we can to our students,” Bryan said.

Since taking over as the interim superintendent, Bryan has been working to establish a new five-year strategic plan for the school system.

“We want feedback from all the stakeholders in our community,” Bryan said. “We want to hear from community members, teachers, staff and students. “We haven’t had a plan in place for several years. It’s time for a new plan that moves the district forward towards excellence.“

Board of Education President Terry Williams said Bryan was an obvious choice to lead the school system.

“I couldn’t be happier,” he said. “Miss Bryan has been in our school system for 26 years. If you’ve been in the system that long you have to be doing something right.”

Bryan spent the first 13 years of her career as a teacher in the Butler County School System before moving into administration.

Prior to being named superintendent, she was the system’s federal programs director. In that role Bryan has been responsible for the oversight of grants and federal funds totaling more than $4 million a year. She recently played a major role in securing a $500,000 grant that will be used to create two career academies that will be housed at Greenville High School.

She was also instrumental in expanding the system’s Pre-K program and helping the county’s Bright Beginnings program earn recognition as a Banner School by the Council of Leaders in Alabama Schools. She helped launch the Second Chance Dropout Recovery Program that has resulted in 23 diplomas and 50 GEDs to date. She also helped begin Operation Graduation Dropout Prevention.

Bryan currently serves as the president of the Alabama Community Education Association and is a 2010 graduate of the University of Alabama Superintendent’s Academy.