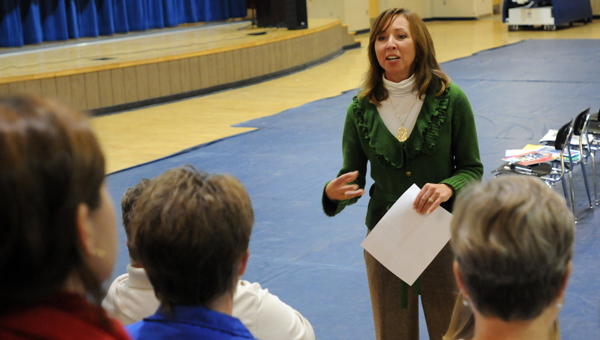 “We want feedback from all the stakeholders in our community,” Interim Superintendent Amy Bryan said. “We want to hear from community members, teachers, staff and students.”

Bryan said that with the Board of Education set to name a new superintendent on Thursday, now is the time to get a plan in place that will guide the school system for the next five years.

“We haven’t had a plan in place for several years,” she said. “It’s time for a new plan, and it comes at the right time with new leadership set to take over.”

The new plan will focus on four key areas, according to Bryan.

Those areas will be learners, support systems, professionals and schools/systems.

“Those four areas mirror the state’s Plan 2020 priorities,” Bryan said. “Those are the things we will be held accountable for by the state.”

Schools/systems will focus on finances, technology and facilities and professionals will focus on areas concerning faculty and staff in the school system.

At Monday’s meeting, parents and teachers shared concerns about the system’s advanced courses, special needs education, students’ motivation and the use of ACCESS distance learning.

Bryan said that community members can volunteer to serve on committees that will help turn the “big picture ideas” that will be identified in the community meetings into action steps in the new five-year plan.

“Anyone who wants to have more of voice in the process can volunteer to be a part of these committees,” she said.

Community members can also offer feedback by taking a brief online survey that can be found of the school system’s website (www.butlerco.k12.al.us). The deadline to take the survey is April 15.

Bryan said the new plan is expected to be in place by August.