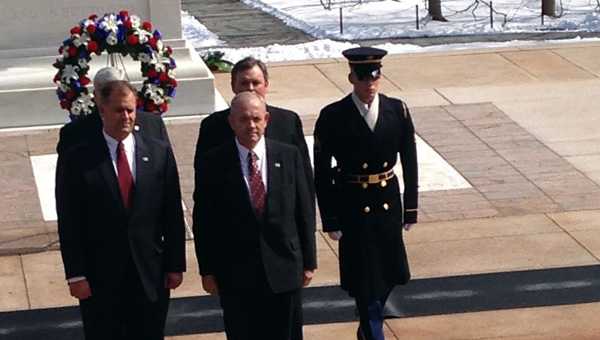 Dunklin and Daniels Funeral Home’s Don Daniels recently spent time in Washington, D.C. attending the 2014 National Funeral Directors Associations (NFDA) Advocacy Summit. While at the Summit, Daniels was one of four selected by the executive director of Funeral Home Association to visit the Tomb of the Unknown Soldier at Arlington National Cemetery. (Courtesy Photo)

The Summit, which was held March 4-6, enabled NFDA members to meet face-to-face with members of Congress and discuss issues of critical importance to funeral service.  During the 2014 NFDA Advocacy Summit, Daniels met with several senators and representatives to discuss the Federal Trade Commission (FTC) Funeral Rule, a federal consumer protection law.  The Funeral Rule has been interpreted as only applying to funeral homes; NFDA members argued that the law should be updated to include all sellers of funeral services and merchandise, including cemeteries, crematories, Internet sellers and retail stores.

Daniels said that by participating in this event he is taking a proactive approach in advancing legislation that helps protect funeral consumers and benefits the community that the funeral home serves.

When the Funeral Rule was first proclaimed in 1984, the funeral home was the primary source of funeral goods and services for the funeral consumer. Today, funeral consumers have a much greater variety of funeral services and merchandise sellers to choose from, including cemeteries, crematories, internet sellers and retails stores.  Consumers who purchase funeral goods and services from somewhere other than a funeral home are not afforded the protections of the Funeral Rule putting them in a vulnerable position.

To address the situation, NFDA members, like Daniels, feel that Congress should pass legislation that would require the FTC to update the Funeral Rule to reflect the current for-profit marketplace options for consumers and afford them the same protections they have under the Funeral Rule when dealing with funeral homes.

“Our funeral home has an unwavering commitment to the families we serve and our profession,” said Daniels. “I was proud to have the opportunity to meet with our elected senators and representatives in Washington, D.C., to help them understand the importance of updating funeral consumer protection regulations.”

While at the Summit, Daniels was one of four selected by the executive director of Funeral Home Association to visit the Tomb of the Unknown Soldier at Arlington National Cemetery.  The Tomb of the Unknown Soldier stands atop a hill overlooking Washington, D.C.  In March 1921, Congress approved the burial of an unidentified American solder from World War I in the plaza of the new Memorial Amphitheater.

The Tomb sarcophagus was placed above the grave of the Unknown Soldier of World War I. West of the World War I Unknown are the crypts of unknowns from World War II, Korea and Vietnam. Those three graves are marked with white marble slabs flush with the plaza.

“It was an absolute amazing, emotional and humbling experience to be able to visit the tomb of the Unknown Soldier,” said Daniels.  “I felt extremely honored to be there in front of someone’s father, son or husband.  It was with a heavy heart knowing that the person gave their life for the freedom we have today and hopefully will continue to have for many years to come.  What we do is nothing compared to the ultimate sacrifice that was paid by these soldiers.  To me, the visit was a small way to honor and respect and to remember this person that gave so much for us.”