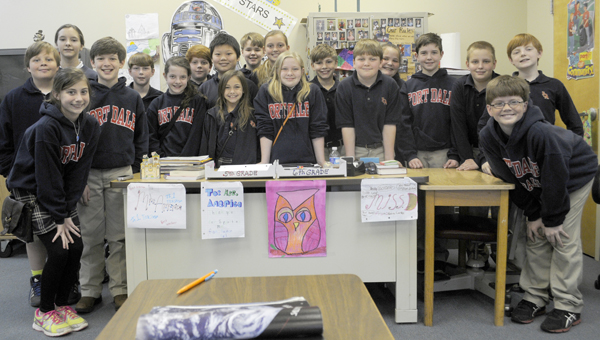 Denise Norrell’s fifth grade class at Fort Dale Academy has been writing senior citizens around the county as part of a pen pal project that was the brainchild of fifth grader Samuel Sherling. (Advocate Staff/Jonathan Bryant)

At the outset of the 2013-2014 school year, one Fort Dale Academy fifth grader called on his fellow classmates to bridge the generational gap between Greenville’s youngest and oldest residents.

Samuel Sherling, a student in Denise Norrell’s fifth grade class, proposed Project Pen Pal, an effort that called on his classmates to write senior citizens around the county once a month for the rest of the school year.

What he probably didn’t expect, however, was that the memories of the experience would last a lifetime.

In August, most students in Norrell’s class were hesitant to pick up the pen and communicate with complete strangers.

Fast forward seven months later and there is hardly a hint of shyness or nervousness to be found. Furthermore, nearly every student has a story to tell.

“My pen pal came to my house and gave me a present while I was in New York,” said Vincent Chen. “It was a stuffed dog with the book, ‘Because of Winn Dixie.’”

John Millan Gaston has been single-handedly keeping the Greenville Post Office in business since August, as he receives more letters than any other student in the class.

“I guess he likes to write letters,” Gaston said. “He writes about Auburn and fishing and hunting, and about when he was a boy.”

Some of the students found more than new friends.

“I didn’t expect to have my pen pal be my great-aunt,” said Catherine Pope. “I’m getting to know her better.”

Unfortunately, not all of the moments have been happy ones.

But the letters they exchanged will allow her to live on in Coleman’s memory well after her passing.

“I remember before she stopped writing me a lot, and she was talking about how she wasn’t feeling good, and how some of her children came to see her,” Coleman said.

“She also asked about some other stuff — about had I planted my garden yet, and stuff like that.”

The students also enjoyed holidays with their respective pen pals, most recently celebrating Valentine’s Day by sending them cards with pictures.

Some of the senior citizens responded with gifts of their own in the form of candy.

But the biggest celebration of all is set for the end of the school year when the class throws a friendship party to meet their pen pals.

The students plan to make a collage of all the things they’ve learned from their pen pals throughout their year-long correspondence.

And the true experience, according to many students, isn’t watching how they’ve impacted the lives of their pen pals, but also in seeing the change within themselves.

Nate Richardson said that, despite the huge age gap, he isn’t so different from his pen pal after all.

Norrell said that in her many years of teaching, Sherling’s Pen Pal project is one of the most rewarding she has ever seen.