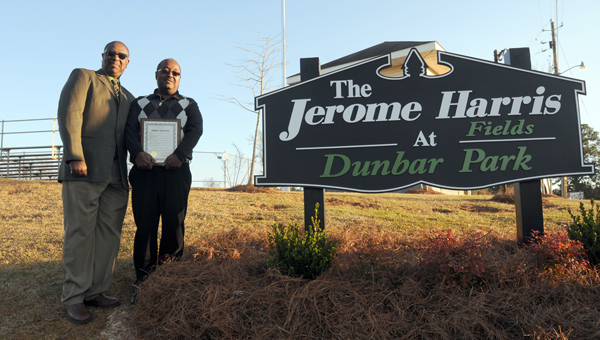 The City of Greenville has renamed the fields at Dunbar Park “The Jerome Harris Fields at Dunbar Park” in honor of longtime Parks and Recreation Department Director Jerome Harris. Harris was named director in 1994. He officially retired Dec. 17. Harris, right, is pictured with former director of Dunbar Recreation Center Tony Stallworth, who recommended Harris for the job when he stepped down to pursue a career in education.

Jerome Harris found himself in an unfamiliar situation Thursday night.

The longtime Greenville Parks and Recreation director was at a loss for words.

Harris was silenced by the unveiling of a sign at Dunbar Park erected in his honor. The City of Greenville renamed the fields “The Jerome Harris Fields at Dunbar Park.”

Greenville Mayor Dexter McLendon said the city made the decision to name the fields in Harris’ honor because of the impact he had on so many people during his tenure with the Greenville Parks and Recreation Department.

Along with the unveiling of the sign, the city also proclaimed March 13, 2014, as Jerome W. Harris, Jr. Day.

Once Harris was able to gather himself and overcome the shock of seeing his name on the sign at the entrance to Dunbar Park, he expressed his gratitude to the city for naming the fields in his honor.

“It’s a surprise,” he said. “I never dreamed that one day they’d name the ball fields after me. It’s a great honor.”

Harris, who was named director of Dunbar Recreation Center in 1984 and later took over as director of the Parks and Recreation Department in 1994, officially retired on Dec. 17, but he’s remained active with the department as a volunteer basketball coach.

“I miss (working at the recreation department),” he said. “Over the years I’ve made a lot of friends and met a lot of people. I miss the kids. But I’m coaching basketball and that keeps me around things.”

Harris’ desire to engage the community through recreation is what led former Dunbar Recreation Center Director Tony Stallworth to recommend Harris for the position when he stepped down to pursue a teaching career.

“I had worked with Jerome at Lomax-Hannon (Community College), and when I took the job with the recreation department I talked Jerome into coming with me and working as director of Dunbar Park,” Stallworth said. “I was a basketball guy. I didn’t know anything about running a ball field, but I knew Jerome did. He did a fantastic job, and when I decided to go into public education I recommended Jerome as my replacement and told them I wasn’t going to leave unless they hired him. They did, and it was obviously the right decision.”