By David Rainer
Alabama Department of Conservation and Natural Resources

The expansion of the February deer season to cover most of Alabama south of Montgomery and a reduction in the daily bag limit for antlerless deer statewide were among the recommendations presented by the Alabama Wildlife and Freshwater Fisheries (WFF) Division to the Alabama Conservation Advisory Board (CAB) for the 2014-2015 hunting seasons.

CAB members meeting in Montgomery heard a presentation from WFF Director Chuck Sykes that included the reasons the Division recommends that north and south zones be created for deer season in the state. The south zone deer season would include 10 days of hunting in February, which is the same season that portions of southwest Alabama had during the 2013-2014 season. 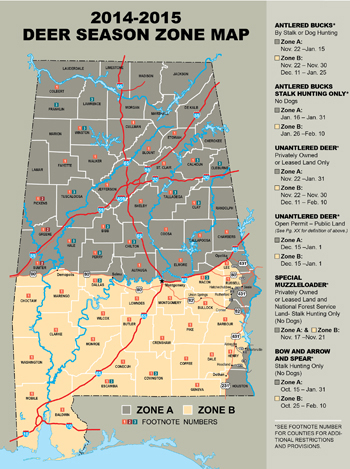 The Alabama Conservation Advisory Board is considering extending deer season into February for much of south Alabama.

Sykes said the decision to expand the February deer season shift, which swaps 10 days of hunting in December for 10 days in February, was based on the deer reproductive study that has been conducted since 1995.

“Unlike any area in the country, we have quite a variation from county to county and region to region as to the average rut time in the state,” said Sykes, who said the boundary for the proposed south zone for deer is the best that could be drawn using large roads or river systems.

Dog deer hunters in attendance were happy to hear that the 10 days of dog deer hunting that were not in the 2013-2014 season have been restored in the recommendations for the 2014-2015 season.

The reduction of the antlerless bag limit from two does per day to one doe per day statewide was in response to hunter requests and WFF biologists who felt the concerns were valid.

Sykes said landowners who feel they need to harvest more than one doe per day can sign up for the Deer Management Assistance Program (DMAP), which will survey the property and determine the number of antlerless tags to issue. Under the DMAP program, landowners can harvest up to three antlerless deer per day.

In other WFF recommendations, all of Morgan County will be opened for turkey season; the number of deer allowed to be harvested on National Forest Lands will be reduced to one per day; the prohibition on silenced firearms will be removed to allow for federally permitted silencers; the bag limit for bobwhite quail will be reduced from 12 to 8; and trapping for raccoons and opossums by special permit will be allowed. The quail limit will not apply to licensed preserves.

Fall turkey hunters will again have 20 days to hunt in the recommendations for the 2014-2015 season.

Sykes also talked about the turkey population in Alabama, which has seen a decline in turkey recruitment in the last few years. He said the estimate of 500,000 wild turkeys in Alabama was based on observational data collected prior to 2006.

“Hunters across the state, just like the deer hunters, have been expressing concerns that turkey numbers are lower than what they have been,” he said. “In an attempt to look at that, our concerns were validated by the 2013 brood survey, which showed our recruitment rate was the lowest we’ve had in the past 24 years.

“With that being said, our Division has formed a turkey committee that is working with Auburn University to explore methods to measure turkey productivity and abundance in Alabama. We are also participating in a multi-state research project because that decline is not just in Alabama; it is throughout the Southeast.”