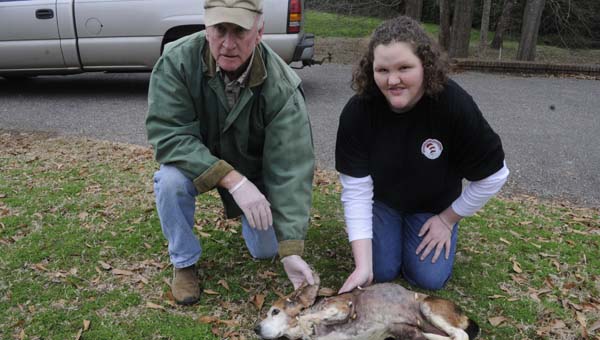 Al Gaston and Susanna Gaston are both looking for ansewrs regarding the sudden disappearance and assault of their 13-year-old beagle, Ellie Mae. The dog suffered from a number of severe cuts and puncture wounds that appear to be inflicted by another dog. Despite the severity of Ellie Mae’s wounds, the dog looks to make a full recovery, thanks to emergency surgery performed at Clay Hill Animal Clinic by Dr. Josh Gardner.

Ellie Mae is a 13-year-old beagle that resides faithfully outside of Susanna Gaston’s home, typically sleeping within her own chain-link fence area at nights or on the front porch.

Her routine sees her wandering occasionally from the front yard of the Gastons’ home, but rarely too far from the vicinity of their yard.

It was that predictable pattern that made her disappearance on Tuesday, Feb. 25, all the more concerning.

“We didn’t see her all day Tuesday and she wasn’t there Wednesday morning, so my dad went to the police department to see if they had seen one on the side of the road,” Gaston said.

“We thought that maybe she’d been run over, and they said that the day before on Tuesday, someone had brought in a beagle that was all cut up, so they told them to take it to the Clay Hill Animal Clinic up here in Greenville.”

But instead of a vehicle, Ellie Mae’s assailant appeared to be at least one other dog.

Though it is still an ongoing investigation with the Georgiana Police Department, one witness claims to have seen the attack in a neighborhood less than a mile away from the Gaston home.

Gaston said that the fact that Ellie Mae was found more than a mile from home doesn’t coincide with her typical behavior.

“At first, we thought she might’ve walked down there, but we think that’s a little bit of a stretch,” Gaston said.

“We think that maybe she was picked up.  This is all a guess, but maybe people thought she was a stray and took her to that location intentionally for a dog fight and then maybe dropped her back off wherever they found her.”

Ellie Mae suffered from a number of severe puncture wounds and deep cuts, many of which required surgery and drainage through the following weekend.

Despite the severity of the wounds, Ellie Mae’s future is a bright one.

Though the wounds stifled her appetite and ability to move, Gaston added that she has begun to gradually progress in the past few days.

“I’ve seen a drastic improvement from Friday when I got home until now,” Gaston said.

“She’s taking antibiotics to fight off infection, and on Sunday she started eating some canned dog food.  It’s still hard for her to move around and we’re not out of the woods completely yet, but I think she’s going to be okay.”

Despite the inexplicable crime, Gaston and her parents are confident that new information will turn up soon, due largely in part to the close-knit nature of the Georgiana community as well as the support of the surrounding areas.

“The police are investigating and my parents and I are satisfied with the way that they’re handling it, so maybe we’ll get something going,” Gaston said.

“My hope is that somebody will hear about this and contact the police or us and give us some information.”

Those that have any information pertaining to the case are asked to contact the Georgiana Police Department at (334) 376-2222.