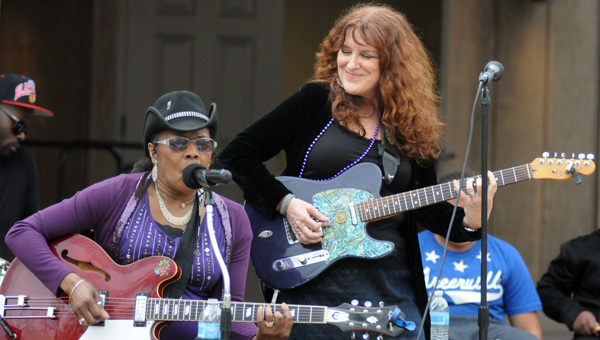 SharBaby, a member of the Blues Hall of Fame, Debbie Bond perform Saturday at the Greenville-Butler County Public Library as part of the Alabama Blues Project. Founded in 1995, the Alabama Blues Project’s mission is the preservation of blues music as a traditional and contemporary art form through interactive programs that educate and entertain. (Advocate Staff/Andy Brown)

Rick Asherson blows into his harmonica, mimicking the sound of a train chugging down the tracks.

As he does, Dave Crenshaw begins to scratch out a beat on a washboard, while SharBaby and Debbie Bond pick out notes on their guitars.

It was a recreation of scene that likely took place many years ago on porches all across Butler County.

This is the blues, and it was on display Saturday as the Greenville-Butler County Public Library hosted the renowned Alabama Blues Project.

She shared the story of Alabama-born W.C. Handy, known as the “Father of the Blues.” She told about Adolphus Bell, who was born in Luverne and went on to become a blues legend. She also talked about Greenville’s Ed Bell and Rufus “Tee-Tot” Payne, both of whom were well-known bluesmen.

Bond and the rest of her band discussed the history of the music. Bond described it as an African-American art form that was invented in the South.

Along with highlighting artists from Alabama that have contributed to the music, such as Big Mama Thornton and Dinah Washington, the group also demonstrated some of the instruments that would have been used to create the music.

Instruments that looked very different than the ones used today.

“In some cases, wires were hung on a wall to create a stringed instrument,” Bond said. “A plow handle attached to a washtub and strung with rope became a washtub bass, and tobacco tins were used to make harmonicas. They were creative and used what they had, and they became very good at playing those instruments.”

Bond is clearly passionate about the blues and its history in Alabama. She gets excited as she shares stories of the state’s legendary musicians and their role in shaping music.

With that, she picks up her guitar and the band begins to play, transporting the audience back in time.