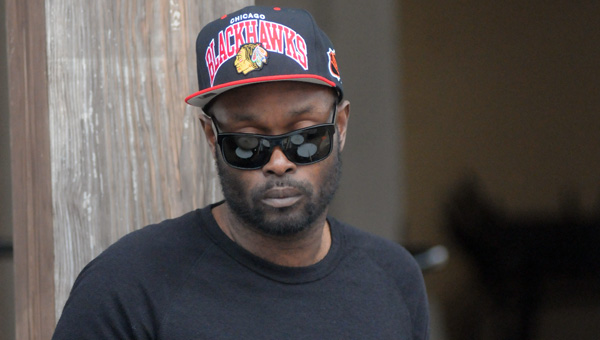 Dave Crenshaw, who has played alongside R&B star Maxwell, Snoop Dogg, CeeLo Green, and Adam Levine of Maroon 5, was in Greenville Saturday performing with the Alabama Blues Project. Crenshaw, who is the nephew of Greenville City Council member Jeddo Bell, is a Birmingham native. (Advocate Staff/Andy Brown)

Music is in Dave Crenshaw’s blood.

The Birmingham, Ala., native has been around it for as long as he can remember.

“I come from a family of drummers,” Crenshaw said. “There are percussionists on both sides of my family.”

Crenshaw, who is the nephew of Greenville City Council member Jeddo Bell, is carrying on the family tradition.

As part of the Alabama Blues Project, Crenshaw helped tell the story of how the creators of blues used whatever they had available to make music — such as a washboard.

“Percussion is defined as anything you strike that makes a sound,” said Crenshaw, a graduate of the prestigious Berklee College of Music in Boston.

Crenshaw then demonstrated how a simple washboard could be used as a percussion instrument.

As part of Saturday’s program, the group told the story of Greenville’s own early 20th Century blues player Ed Bell.

Bell, born in 1905, was born in Fort Deposit and raised in Greenville. His most famous compositions include “Mamlish Blues” and “Hambone Blues.”

Bell passed away in Greenville in 1966.

Crenshaw said that he is unsure if he is related to the legendary bluesman.

While the two may not come from the same family tree, they share a common bond.

Both have music in their blood.