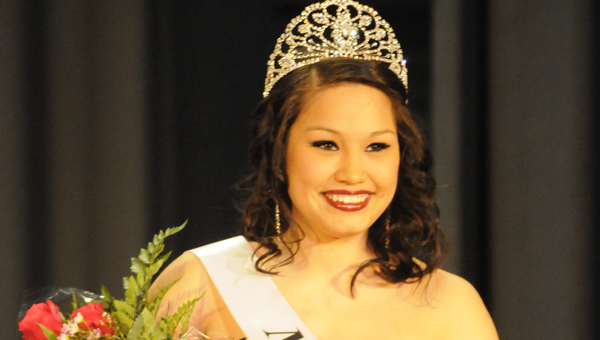 In 2014, it is estimated that more than 27,000 people will be diagnosed with some form of cancer in Alabama alone.

And while the efforts of Harley’s Angels and Saturday night’s Relay for Life beauty pageant won’t likely do much to change those statistics, the money raised will undoubtedly alleviate the burdens placed on a number of affected families.

Though the Harley’s Angels team members won’t be revealing the specifics on how much money was raised during the pageant, team member and event coordinator April Langford made it clear that the pageant was successful in more ways than one.

“We didn’t have as many contestants, but it was still a great deal of fun,” Langford said.

“The girls had a great time, and it’s always a success when we can raise money for such a good cause.

“We also hope that we’re bringing awareness even to the younger girls, and it’s very important that they get checked, as well.”

The desire to spread awareness extended to the contestants as well, as nearly each participant in Saturday’s pageant walked the runway in honor of a lost friend or family member or someone currently battling cancer.

The money raised won’t all go toward funding research at the American Cancer Society, but will also serve a number of purposes, including propagating information for cancer awareness, providing wigs for women who have lost their hair during chemotherapy and also covering expenses for medical bills, traveling and housing.

Despite the somewhat dour circumstances, the mood Saturday was a lighthearted one, thanks in no small part to the energetic contestants in the Golden Diva division for women 45 years of age and up.

“And it’s not about grace and poise, but it’s about fun and enjoying the night and encouraging your friends and family to be supportive and be a part of that.

“It’s just a fun night for them to get their hair and nails done, their makeup done and put on a fancy dress and really go out and enjoy the night with friends.”

The amount raised during the Relay for Life beauty pageant will be revealed on Relay Night during Mother’s Day weekend.