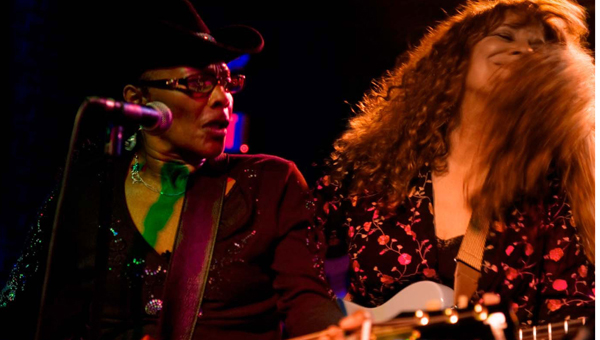 Sharbaby, a member of the Blues Hall of Fame, and Debbie Bond will perform Saturday at the Greenville-Butler County Public Library as part of the Alabama Blues Project. The performance begins at 1 p.m. (Courtesy Photo)

The renowned Alabama Blues Project will perform at the Greenville-Butler County Public Library on Saturday at 1 p.m.

“We’re looking forward to a great performance that will not only be entertaining but educational as well,” said Library Director Kevin Pearcey.

The organization’s highly popular “Introduction to the Blues” program focuses on artists from Alabama that has contributed to the music, including Big Mama Thornton, Dinah Washington, and W.C. Handy.

Bell, born in 1905, was born in Fort Deposit and raised in Greenville. His most famous compositions include “Mamlish Blues” and “Hambone Blues.”

Bell passed away in Greenville in 1966.

According to Pearcey, some biographers put Bell’s – albeit modest – catalog on par with the legendary Robert Johnson.

“This is an opportunity to hear the music of those artists that helped shape the Blues and learn more about how it evolved,” said Pearcey.

Performers on Saturday include Sharbaby, a member of the Blues Hall of Fame, and Debbie Bond, who co-founded the Alabama Blues Project in 1995.

Pearcey said, weather permitting, the performance will be held at the library’s Camellia Pavilion.

“It looks like the weather is going to cooperate for Saturday so we hope we’ll be able to have everything outside,” he said. “If not, we’ll just move inside to our meeting area.”

Founded in 1995, the Alabama Blues Project’s mission is the preservation of Blues music as a traditional and contemporary art form through interactive programs that educate and entertain.