Exhibit offers ride into the past 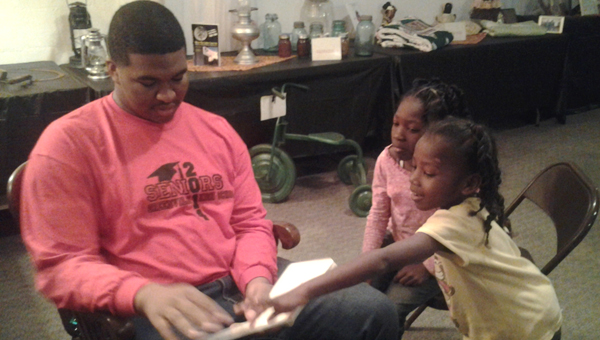 Jaeques Brown reads to a pair of children who attended the 2014 Black History Exhibit at the Robinson Activity Center. This year’s theme, “Riding into the Past,” features a collection of bicycles and tricycles, as well as other means of entertainment for black children in an age before television and the Internet. (Courtesy Photo)

One of Greenville’s wisest residents is doing her part to remind the African American community that you can’t know where you’re going until you know where you’ve been.

This year’s theme, “Riding into the Past,” is a play on words involving Robinson’s antique collection of bicycles and tricycles on display throughout the exhibit, as well as other means of entertainment for black children in an age before television and the Internet.

In this regard, one walk through Robinson’s exhibit is very much a ride down memory lane.

“I’ve been putting this museum together since 1996, and most of the items are donated from my friends, both black and white, from around the area,” Robinson said.

Robinson has had difficulties in coordinating the exhibit in the past few years, but this year brought some assistance from a familiar source in Warrior Ministries founder Evangelist Carolyn Griffin.

“Carolyn is a relative and a church member, and she was one of my girl scouts, and she worked with me in the Butler County Optimist Club and the Butler County Civic League” Robinson said. “For the past several years, I haven’t been able to get it open, but she told me ‘what about letting me and my young people help set it up for you?’ I told her OK, and that’s just what she did.”

Griffin brought a number of helpers in tow from her youth organization, the Y ME program (Young, Motivated and Empowered to Be All that God Has Ordained Me to Be), as well as members of the Greenville High School Key Club.

“Mrs. Robinson pretty much helped raise me over at First Baptist Church, and we always did Girl Scouts and Black History Month and everything,” Griffin said. “I knew that she was getting older and hadn’t done it for a minute, so I basically asked her if I could help her bring it back.  I knew that it was her heart.”

The volunteers not only helped move the exhibit items from their previous location in years past, but also helped to display them in unique and interesting ways for this year’s current exhibit.

Jaeques Brown, a senior at Greenville High School, is one such volunteer, and the entire experience thus far has been far more valuable than a few community service hours.

“Helping with the exhibit has actually motivated me to do more in the community, and to actually express what black history is all about,” Brown said. “We must go out into the community and tell how black history played an important role in all of our histories.”

The exhibit is open each Thursday, Friday and Sunday afternoon in February from 2 p.m. until 6 p.m., and on Saturday afternoons from noon until 5 p.m.