Legendary musician an agent of change 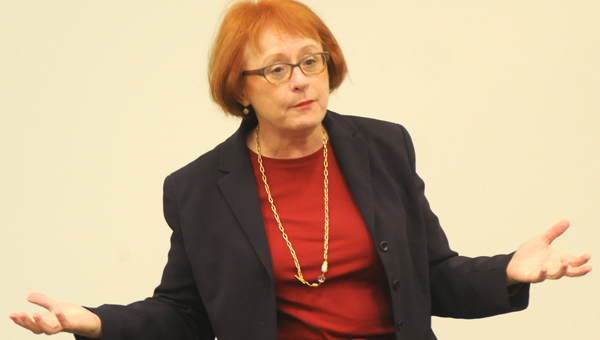 Daphne Simpkins, a member of the Alabama Humanities Foundation’s Road Scholars Speakers Bureau, shared with LBW Community College students on Wednesday parts of Nat King Cole’s story and how he used his role as a popular musician to bring about sociological change in American culture. (Advocate Staff/Andy Brown)

Nat King Cole was a legendary musician who rose to prominence as a leading jazz pianist.

Cole, who was born in Montgomery, Ala., in 1919, helped mold jazz into a new musical genre.

But his influence reached much farther than music, as students at LBW Community College learned on Wednesday.

Daphne Simpkins, a member of the Alabama Humanities Foundation’s Road Scholars Speakers Bureau, shared parts of Cole’s story and how he used his role as a popular musician to bring about sociological change in American culture.

“Nat King Cole was someone who became one of the most powerful changers in American culture,” Simpkins said.

Simpkins shared how during Cole’s career he performed at hotels, but due to segregation was not allowed to stay at those same hotels. Cole would later sued hotels that would not admit him, and in doing so, helped end the practice of segregation.

“He was not overt or a militaristic activist, but he did work for change,” Simpkins said. “He was a quiet activist.”

In 1956, Cole became the first African American to broadcast his own television program. While the show achieved good ratings, it failed to secure enough advertising to stay on the air, and ran for just one year.

While his career as a television host failed, Cole’s music remained as popular as ever.

In his lifetime, he recorded more than 100 pop chart singles and more than two dozen chart albums, selling more than 50 million records.

Simpkins, who wrote a biography for children: Nat King Cole: An Unforgettable Life of Music, said it was her mother that helped her realize Cole’s impact.

“I came to recognize that he mattered through my mother,” she said. “When Nat King Cole would come on the television, my mother would tell everyone to get quiet, including my father, because something special was about to happen. Nat King Cole was one those special people, and my mother helped me see that.”

Simpkins said her father encouraged her to right a book about Cole in order to share the Alabama-born musician’s story with a younger generation.

Simpkins is also using her platform as a member of the Alabama Humanities Foundation’s Road Scholars Speakers Bureau to educate others about Cole.

The Alabama Humanities Foundation encourages and promotes appreciation of literature, history, law, philosophy and the arts through programs, events and grants to help others discover and share the meanings of life found through the humanities.