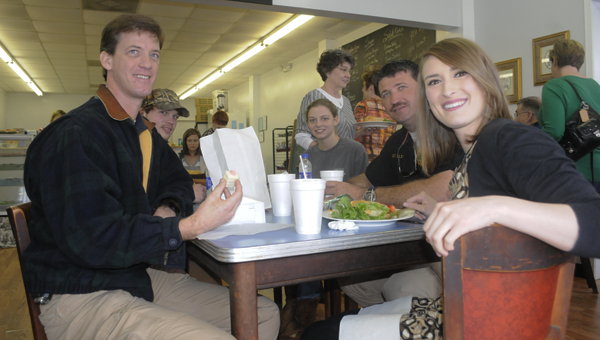 Shoppers on East Commerce Street were greeted with a familiar aroma hovering over the Camellia City Bakery as the establishment reopened for business Monday morning.

And even in the wake of co-founder Ozzie Judah’s passing, Monday’s turnout made it abundantly clear that his spirit hadn’t gone anywhere.

“God has been overly gracious — we’ve just been slammed mostly all day,” said Ozzie’s wife and Camellia City Bakery co-founder Ann Judah. “Today has far exceeded my expectations because I was scared — I didn’t know.  Ozzie’s gone.  Are they going to come?  But God sent them.”

And they came in droves.  Business began at 9 a.m. with a dozen daily visitors in the Men’s Coffee Club, and lunch ensued far ahead of schedule barely an hour and a half later.

By noon, nearly everyone with a stomach had made a visit to the bakery at least once, including one particularly loyal customer.

“I’m a customer at least three days a week, and sometimes four or five,” said Dr. Jean Thompson. “The lobster bisque is my favorite, and this is the only place in town you can get it.  I wouldn’t have missed the reopening, under no circumstance.  Even if I would’ve been sick, I would’ve come.”

And as several patrons discovered Monday morning, the same great offerings they’ve come to know and love are still available.  But there will be one minor change to the menu.

“I’m not going to do wedding cakes,” Ann said. “I don’t have the talent or the ability to do that.  That doesn’t mean that somewhere along the way, someone may not come in and be able to say ‘I can do that for you,’ but as of right this minute, I can’t do that.  Outside of that, we’re going to cater, we’re going to rent the Camellia Room out for events, we’ve got our chicken salad, pimento cheese, croissants and lobster bisque, and we’re going forward.”

Despite that initial fear and hesitation that Ann felt, the decision to reopen the bakery was already made for her.

Before Ozzie’s health took a turn for the worst, he had agreed to take the month of January off to rest, at the request of his wife and daughter, following a number of consecutive 15-hour days with the business’s catering service.

But he agreed on one condition — he would travel around Alabama, visiting Mom-and-Pop diners to see what kinds of sandwiches and soups they offered.

In this regard, he was constantly thinking of ways to improve the bakery, even in his final days.

“This was Ozzie’s dream,” Ann said. “He loved — I cannot emphasize how much — but he loved these people in Greenville, Ala., as well as I do. And me and my daughter knew that this had to go on.

“First off, I’ve got to make a living.  Secondly, the first day I came into (the bakery), I went into a meltdown.  And then I realized, ‘OK, Ann, you’ve got a job to do.’ I’m going to make Ozzie proud. There was no way that I could just let this place that he loved dwindle down, die and just walk away.”

But above all else, the support of the community, including customers as well as those who lent a helping hand on reopening day, is what keeps the bakery — and Ozzie’s dream — alive.

“Their support has been astronomical, because I could not have done it by myself,” Ann said. “It’s humbling, and it’s an honor to me that people aren’t doing anything but honoring my sweet, sweet Ozzie.”