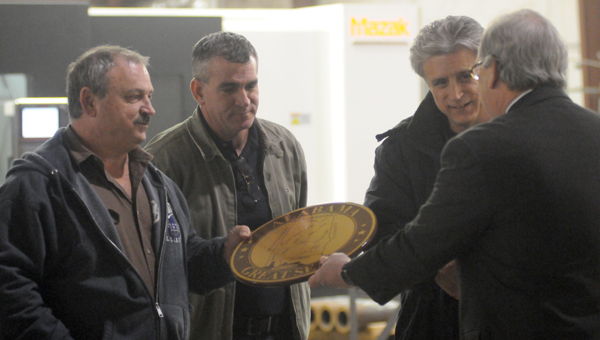 Gary Faulkner, director of business development with the Alabama Department of Commerce, presents Kent Boquet, Kurt Boquet and Matt Boquet with a seal of Alabama Thursday following an announcement that Kajan Perfection is expanding at its Georgiana facility. (Advocate Staff/Andy Brown)

A Louisiana-based company has announced its plans to expand its Georgiana facility.

On Thursday, Kajan Perfection announced a $1.5 million investment in new equipment at its Butler County facility, which directly led to the creation of three new jobs. Company officials said they expect to add at least two more jobs as part of the expansion.

“We have the wherewithal to get more equipment, we just need more people to operate it,” said Matt Boquet, cofounder of Kajan Perfection. “That’s why we located in this area. We feel there’s a lot of opportunity here.”

Kajan Perfection, which has a facility in the Georgiana Industrial Park, specializes in manufacturing close tolerance, precision parts for the oil and gas, agriculture, test and separation, petrochemical, and marine industries using computer numerical control machines.

CNC machines are automated milling devices that make industrial components without direct human assistance. They use coded instructions that are sent to an internal computer, which allows factories to fabricate parts accurately and quickly.

Kurt Boquet, vice president of Kajan Perfection, said the new piece of equipment added to the company’s Georgiana facility will allow Kajan Perfection to machine larger parts and tools for its customers.

“It gives us a much larger capacity,” he said. “It will allow us to create a new size product.”

Kent Boquet, president and cofounder of Kajan Perfection, said the company, which has 30 employees in Louisiana and 10 in Alabama, hopes to continue to expand at its Georgiana facility.

“We have plenty of room to expand over the next several years,” he said. “We’d like to see this facility be as big as our Louisiana facility.”

Georgiana Mayor Jerome Antone said the expansion is a sign of hope for the City of Georgiana.

“Anytime you bring jobs to town it’s a good thing,” he said. “It gives us hope. We continue to hope that Georgiana will become a growing town.”