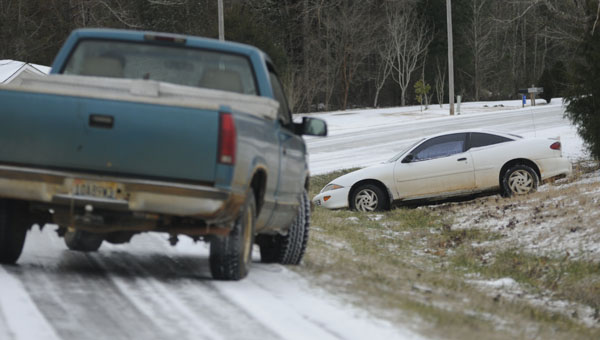 Icy roadways resulted in a large number of accidents after a winter storm dumped ice and snow on the county Tuesday. (Advocate Staff/Tracy Salter)

The Camellia City felt Mother Nature’s wintry touch as the ice storm kept city and county officials scrambling to ensure the safety of drivers caught in icy conditions on roadways.

“We got up at daybreak Wednesday morning and went out to look at the roadways, and it looked like an ice skating rink,” Phillips said. “In my lifetime that I can recall, I have never seen this much ice here before.  The last one that really stands out to me is back in 1993, but I just don’t recall there being this much ice associated with it.”

Greenville Police Department Chief Lonzo Ingram agreed that the ice — and not the snow — has been the main source of problems throughout the county.

“We’re familiar with ice forming on a bridge — you go out and throw some dirt and salt on the bridges and everything’s OK,” Ingram said. “But when it forms a sheet of ice on all the roads — city roads, county roads and the interstate — that is really a problem in this part of the country.”

The GPD had its hands full Tuesday and Wednesday in aiding a number of motorists that found themselves in ditches as a result of icy roads, which in turn created roadblocks — so much so, in fact, that the department made an executive decision to prioritize drivers within the city limits.

“We finally had to make a decision that we weren’t going to respond to calls outside the city limits on the interstate unless there was an injury, because we were just running ourselves ragged trying to do that,” Ingram said.

Few areas of the state were spared as an unfortunate number of northern Alabamians were trapped in homes, schools and vehicles for hours on end.

Fortunately for Butler County, prior planning with the Butler County Emergency Management Agency prevented a similar number of would-be disasters.

“We had regular meetings coming up until the storm, and we were as prepared as we could be to handle a storm like this,” Ingram said.

But the real blessing, according to both Ingram and Phillips, was that Butler County experienced no major power outages during the ice storm.

“Not having any power outages has been a game changer during this whole event,” Phillips said. “If the power goes out, people are going to lose heat.  And then of course we have people who are dependent on power for oxygen machines and different types of medical reasons, which creates a lot of problems whenever you start dealing with those types of issues.”

But Phillips added that Butler County was fortunate for more than just the timely warning.

“The general public also deserves a thank you for jus taking heed of the dangers, especially once we’d seen just how much ice was on the roadways, and just staying at home,” he said.