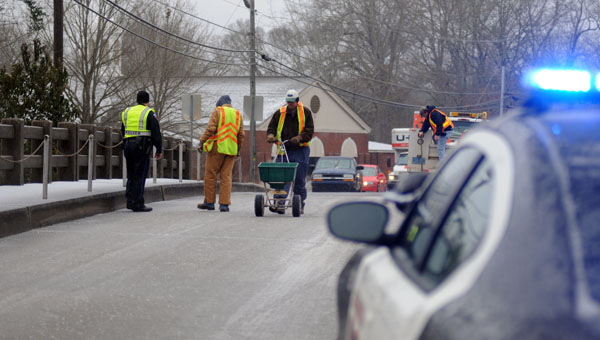 Local officials are urging residents to use caution as a winter storm bears down on the area.

Butler County is being blanketed by a wintry mix — a combination of freezing rain and snow — which has made roadways throughout the county dangerous to travel.

County officials are urging citizens to stay off the roads unless absolutely necessary.

“We’ve already got several bridges that are icing over,” said Butler County Sheriff Kenny Hardin. “If you don’t need to be on the road, stay in and stay off of them. At this time the roads are dangerous.”

The county “closed” the roads to all nonessential travel at 12 a.m. Tuesday. The roads remained closed.

Butler County Commission Chairman Frank Hickman said that the county is in effect asking citizens not to travel the roadways if at all possible.

“No one will be ticketed for using the roads, which are paid for by the taxpayers, but we are advising everyone not to be out on the roads if possible,” he said. “As a county, we’re going to err on the side of caution.”

County Engineer Dennis McCall said county road crews will be on call around the clock to address any road and bridge issues. A 22-person crew from the Alabama Department of Transportation will be staged in Greenville to respond to issues with state roads and bridges.

Crews with the county and City of Greenville are also salting and sanding roads and bridges.

Hardin encouraged citizens to call 911 to report issues with the roadway.

In an effort to help limit travel and keep employees and citizens safe, all county offices will be closed Wednesday.

Greenville Mayor Dexter McLendon also asked that citizens avoid driving if at all possible.
“I know we don’t get this stuff a lot, and it’s real pretty and everyone wants to go see it, but I’d really ask that folks not do that,” McLendon said. “We’d just ask that everyone would stay off the roads if they can.”