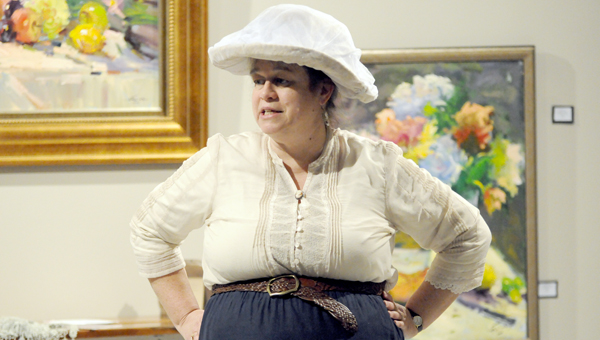 Empty seats were a luxury at the High Horse Gallery Thursday evening as the locale transformed into a stage for the one-woman show Julie Williams and her portrayal of Titanic survivor Sylvia Caldwell.

But the performance was more than a simple reenactment, as Williams’ story came straight from the horse’s mouth.

“It originated from my great-uncle (Albert Caldwell), who survived the Titanic, and he was like a grandfather to me,” Williams said. “He was traveling with his wife (Sylvia) and his baby, and they all survived.  He remembered it very well, so as one can imagine growing up I was all ‘Uncle Al, Uncle Al, tell me a story!’”

Those stories would serve as the basis for Williams’ critically-acclaimed biography, “A Rare Titanic Family: The Caldwells Story of Survival.”

But as fate would have it, Williams would discover that the sinking of the Titanic only framed a far larger and more interesting story that her great-uncle never spoke of.

The Caldwells were Presbyterian missionaries who traveled to Bangkok and Naples, Italy, but, after Sylvia took ill, they decided to return to America.

However, fellow Presbyterian representatives saw the couple’s return to the U.S. as a breach of contact and, ultimately, a lifelong commitment to the church.

The discovery of the story behind the bigger picture led to one shocking revelation after another for Williams, including the true intentions of the fleeing couple’s boss once the Caldwells had made it safely stateside.

“Their boss had changed his mind and had sent an ambulance to meet Sylvia to have her examined, and if she were to be found healthy, they would have to go back or pay their way home, which was beyond a possibility,” Williams said. “It turns out that they were in a cat-and-mouse chase around the globe, and they were the mice.”

Writing a book detailing such developments is one thing, but reenacting those events onstage is another matter entirely.

For Williams, who has zero acting experience, the performance evolved from a rather strange request.

“I was speaking at the Florida Chautauqua down in DeFuniak Springs, Fla., and I had approached them saying that I’d love to present my book,” Williams said.

What Williams didn’t know, however, was that she would be asked to dress up as her uncle’s wife during the presentation.

“I got my costume together, wrote a script and I practiced it.  I remember being so nervous, because I’ve never done any acting in my life,” she said.

But despite being a relative newcomer to the stage, her performances give the story access to a new audience.

“I’m fighting for my book,” Williams said. “I think it’s one of the better Titanic stories because it’s straight from the horse’s mouth. There was a lot of focus on the ship itself and the famous people lost on it, and mine was kind of a breakthrough into the second class, and so I’m kind of proud of that.  But it’s a story I love, and I love telling it.”

“A Rare Titanic Family: The Caldwells Story of Survival” can be found at Amazon.com in both paperback and Kindle formats.