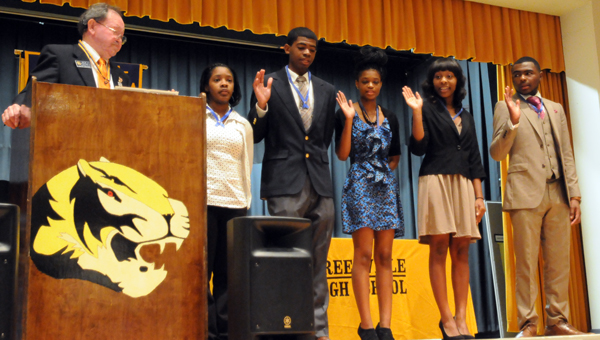 That family got a little bigger on Wednesday.

“It’s hard to build a Junior Civitan club,” said Patterson, the Junior Civitan Chairperson for the Alabama-West Florida District. “It takes someone going at it continually. I had someone call me for almost two years about starting this club. If that person had not called me all those times, we wouldn’t be here today.”

Patterson said that person was Lomax Owens, a past president of the Camellia City Civitan Club. Owens was on hand for Wednesday’s ceremony and welcomed the newest members to the Civitan organization.

“We’re so excited to be chartering this club,” Owens said. “This is a special group. We’re proud citizens. That’s what Civitan is all about – building good citizens.”

Patterson also credited GHS teacher Shonda Bell with making the formation of the club possible by agreeing to serve as its sponsor.

Along with presenting the club with its charter and banner, District Gov. Jack Groves swore in the club’s officers.

Daisha Durant will serve as president.