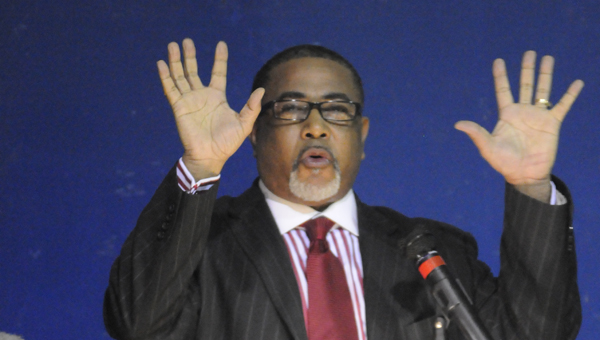 Nothing around you is going to change until something within you changes.

Bennett, senior pastor of Freewater Missionary Baptist Church in Irvington, Ala., derived the morning’s subject, “He looked at himself,” from Luke 15:17, which details the parable of the Prodigal Son.

Bennett’s message asked that, like the Prodigal Son, attendees take an introspective and retrospective look within.

“You are only two or three generations from being extinct, forgotten and lost in history, if you don’t do something in life that people will remember you for,” Bennett said.

“We all have different callings, and come from different places.  But I believe we all can make some kind of contribution to life.  It’s not about accumulating things in life, but about contributing things to life.”

Bennett went on to say that Dr. King’s lessons and teachings applied socially, as well, perhaps now more than ever.

He also surmised that if Dr. King had the privilege to see the world today, he would likely be disappointed in many respects.

“We can’t be legendary and be selfish at the same time.”

Greenville Mayor Dexter McLendon was among a number of civic leaders in attendance Monday morning to deliver greetings, and he was similarly moved by Bennett’s sermon.

“I enjoyed the message from Rev. Bennett,” McLendon said.

“What are you doing with your life?  How are you making a difference in the lives of others and leaving your mark?  I thought it was an important message about unity and making this world a better place.”

McLendon also recounted a story from his youth that served to illustrate just how far we’ve come.

“I remember going in a restaurant down from the courthouse when I was a little boy, and they didn’t let African Americans come in there to eat — they had a window where they could order, but they had to stay at that window,” McLendon said.

“I remember not understanding that as a little boy. Martin Luther King was a visionary and he changed this country.  He changed the lives of so many people, and it needed changing.”

Rev. Roy Gandy closed the ceremony with reflections of the past during the civil rights movement.

He also thanked the parents that brought their children, adding that Monday’s message was one meant for those who had experienced the injustices of the past firsthand, as well as those who had only read about them in textbooks.

He ended with a reminder that the majority of the work still lies ahead.