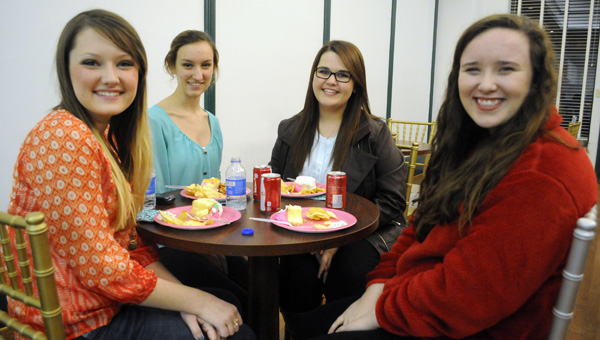 Fortunately, she had the love and support of an entire community Thursday night as friends and family gathered for a proper sendoff.

“I greatly appreciated all those who came to support me at my sendoff party,” Teate said.

“It is easy to become overwhelmed by the process, but when you have so many people supporting you, you definitely stay calm and confident.  It is definitely easier to move on to a state competition knowing that I have so many supporters here in Butler County.”

Butler County Distinguished Young Woman program chairperson Starla Jones said that it’s been a pleasure to work with Teate for the past several months.

“She is very independent, easygoing and self-sufficient, and she has been a joy to work with because she just takes care of things when she’s supposed to — she has adhered to all of her deadlines, and she’s just really been on top of things,” Jones said.

“She’s just been a true distinguished young woman for us.”

Jones added that despite the excellent group of girls chosen to participate within Butler County, Sierra’s stage presence, grace and general well-rounded nature allowed her to stand out.

And despite the challenging week ahead in the latter stages of the Distinguished Young Woman program, Jones believes that those qualities that dazzled judges back in August will serve Teate well moving forward.

“I think she’s had some experience in her past where she’s been away from home and she’s had to meet new people, and that’s what it’s all about,” Jones added.

“In fact, she won’t even be able to have her cell phone or any connection with Twitter, Facebook or email for the week, and I think she has a lot of maturity that way.  She’s talented, smart, friendly and down to earth, and I think all of that together makes her the complete package.”

Teate’s parents, Christopher and Heather Teate, were both similarly proud of their daughter’s accomplishments, but they were both even more pleased that a spotlight was being shone on deserving young women in the Butler County community.

“I am extremely thankful, and it shows that there is a commitment to the program and community involvement,” Christopher said. “I think that a lot of times the young women in this community get shadowed because of the sports.  But having a daughter and seeing her friends get the recognition they deserve has been a great honor.”

Heather said: “I’m just really glad they continued on with what used to be Junior Miss and is now Distinguished Young Women, and I just hope that this would encourage more girls through Butler County to be a part of the program. Girls from McKenzie, Georgiana, Greenville High School and Fort Dale could all come together and put on a great show for next year.”

The Distinguished Young Women state competition will be held on Jan. 17-18 at Frazer Methodist Church in Montgomery.