Spurlin retires after 27 years of service to 2nd District 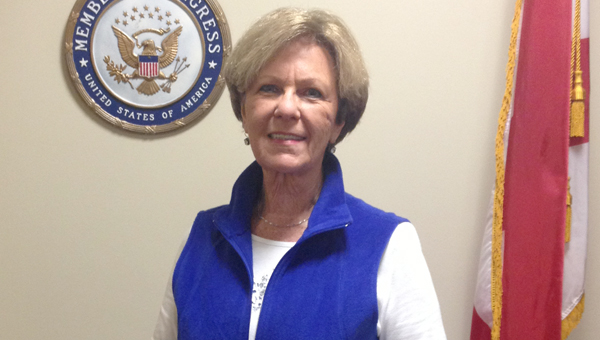 U.S. Rep. Martha Roby announced Tuesday that Frances Spurlin, who currently serves as a constituent services representative in her Covington County office, will be retiring after 27 years of service to Alabama’s Second Congressional District.

“It has been such an honor to have Frances serve on my staff since being elected in 2010,” Roby said. “Throughout Covington County, Frances is known for her compassion, hard work, and service to those in need. Frances has been a cornerstone for my constituent services team, which helps constituents navigate federal agencies, whether it be the VA, Social Security, Medicare, or help obtaining a passport or VISA. Frances is going to be dearly missed, and I know she leaves behind big shoes to fill.”

Spurlin, who lives in Opp, began her Congressional career in 1985 for Rep. Bill Dickinson. Spurlin continued her service to the Second District under Rep. Terry Everett and now for Roby.

“It is bittersweet to look back at the memories over the past 27 years of working for Alabama’s Second District,” Spurlin said. “Our area has been fortunate to be represented by a number of first-class individuals, and I consider myself fortunate to have been a member of their teams. I will undoubtedly miss working with constituents every day, but I look forward to spending more time with my family and grandchildren.”

Roby honored Spurlin in a Congressional Record entry on Dec. 9.

Roby’s Covington County office will remain fully operational and will be staffed by Amelia McMahon. McMahon, a native of Florala, worked previously for Rep. Jeff Miller in his Fort Walton Beach district office.

“Amelia is a professional individual who has great knowledge of the Congressional process,” Roby said.